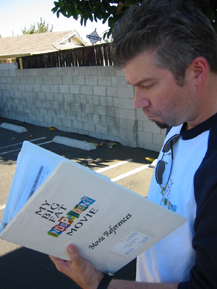 At a time when most independent box office successes have major studio backing, it takes a truly independent film to put the indie genre in its place.

With My Big Fat Independent Movie, Film Threat founder Chris Gore co-writes and produces a film that spoofs the movies many film critics love the most, the so-called independent movie. Following in the footsteps of several other spoof successes – films like Airplane!, Not Another Teen Movie and Scary Movie – My Big Fat Independent Movie spoofs such well-known indie box office hits as My Big Fat Greek Wedding, Memento and any one of Quentin Tarantino’s many feature projects.

"There are about 30 films spoofed in this movie," Gore states, "but each movie had to have made at least $100 million at the box office or be known among the indie fans – movies like Swingers or Clerks."

Filmed in 18 days at over 35 locations, My Big Fat Independent Movie is just what the title implies – an independent movie. Fully funded by private investors, the movie opens Sept. 30 in Los Angeles, before rolling out in other select cities this October. Utilizing festival bookings and print and online PR, the film’s cast and crew are hoping to generate some word-of-mouth buzz to become that rare, non-studio independent success.

"This movie basically came together by a group of guys drumming up some money and doing it the old fashioned way," says Philip Zlotorynski, director of My Big Fat Independent Movie. "I think it’s fitting that we’re an independent project spoofing the independent genre because I don’t know if a studio could even spoof independent films. They don’t understand the concept of shooting more than a page a day."

My Big Fat Independent Movie marks Zlotorynski’s feature directorial debut, an accomplishment that, according to Gore, is becoming increasingly difficult for aspiring filmmakers these days.

"The independent film world has evolved over the years," Gore explains. "If some guy from New Jersey were to shoot a 16-millimeter black-and-white film like Clerks today, it wouldn’t appear at a film festival. The focus of festivals has shifted to the independent labels within major studios."

"I agree that it’s harder for an independent filmmaker to get his or her work seen," adds Zlotorynski. "Ever since the studios got into the independent game over the last 10 years, Sundance has become overrun by studios bringing in huge corporate dollars to screen their ‘small’ movies. It’s much harder to get truly independent movies out there, which is a shame cause there are a lot of really good movies that never get seen by anybody while some really bad studio movies get distribution."

Although the film may poke fun at some artistic full-length features not everyone outside of the industry is familiar with – movies like Run Lola Run and Pi – both Gore and Zlotorynski believe that My Big Fat Independent Movie is a film any movie lover can enjoy.

"The independent world needed a spoof like this to poke fun of all its clichés," Gore states. "This movie has two layers of humor to it – the lowbrow, toilet humor layer and the smarter layer that deals with things like subtitles for the art crowd."

"There’s one really funny scene where Amelie and El Mariachi meet and they try to speak their respective languages to each other, but realize that they can’t have a conversation because they don’t understand what the other one’s saying," Zlotorynski says. "It’s a very simple scene, but it’s really funny."

While no independent film was safe from being spoofed in the movie, Zlotorynski explains why one of independent cinema’s biggest success stories was left out of the script altogether.

"Although independent movies have never been spoofed in a feature film before, there have been plenty of spoofs about making movies and specific movies in general. One movie that’s been spoofed to death is The Blair Witch Project. We talked about including it in My Big Fat Independent Movie, but we just couldn’t work it in, in a meaningful way. There’s not a joke to tell about it that hasn’t been told already. The way the studio tried to capitalize on that film’s success with the merchandising and the sequel … it died such a horrible death."

Originality is something both Gore and Zlotorynski pride My Big Fat Independent Movie on. As Gore says himself, "Audiences are becoming more segmented and the same old thing doesn’t always work – just look at the summer box office. But for people who want something different, we’ve got different up the ass."

"I was concerned that there was stuff we couldn’t get away with," Gore admits, "but luckily we didn’t have to make any cuts. I think it’s cause the violence was so over-the-top and the movie was a comedy that we got away with the things we did."

"Over the years the level of violence in independent movies rose so much with films like the Kill Bill series that we knew we had to spoof the idea of violence," Zlotorynski adds. "But since we didn’t have the money to do the special effects shots the same way, we decided to make things look surreal and silly instead. There’s this one scene where this guy gets shot in a market and there’s just so much blood it’s ridiculous."

As Gore and Zlotorynski anxiously await to hear audiences’ reactions to the movie outside of the film festival market, Gore keeps in mind something he learned from his days as a film critic to prepare himself for any scathing reviews that might be written.

"Audiences can love a film critics hate. Not Another Teen Movie is a brilliant film, but the reviews were mixed. Going into this project, I knew the business was safe – comedies are the number one genre of film out there – but critically speaking, I knew to expect mixed and negative reviews. I just hope people realize that we’re not criticizing these types of films. This is a tribute, a love letter to independent movies. Some of the filmmakers we’re spoofing are some of my personal favorites. Critics can take their potshots, but anyone with a sense of humor should find this movie funny."

Interviews
Lily James and Sebastian Stan find a real relationship at the heart of 'Pam & Tommy'
91 views
Interviews
Ricky Gervais knew people would be mad about his new Netflix special. He did it anyway
589 views