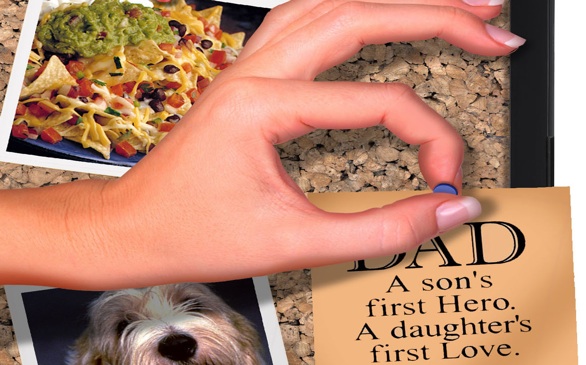 Like the images on its site, the clever definitions and analogies by Pinterest users are endless: “Pinterest is like getting a new magazine in the mail every day.” “Pinterest is everything you never knew you always wanted to know about anything.” “It’s like Etsy and Pottery Barn had a baby and made a scrapbook of their cute little family.”

The latest social media craze is a virtual pin board, or scrapbook, to collect and organize your favorite images and ideas from around the Web. While the site has something for everyone, it’s dominated by home decor, fashion, food and crafts, and has become the new Internet darling — make that obsession — among women in their 20s, 30s and 40s.

“Pinterest is like fantasy football for girls,” said Jeannette Appold of Rosemount, Minn. The 44-year-old attorney and mother of two says the social bookmarking site has added value to her life by bringing out creativity that she never knew existed. “Michael’s (craft store) has gotten so much of my money lately,” she said of her newfound passion to imitate craft projects she’s found on the site.

Pinterest has been around since March 2010, but its popularity has recently exploded, making it one of the 10 most popular social networking sites. The site grew to nearly 5 million users in November 2011, from just 418,000 in May, according to metrics firm ComScore.

Here’s how it works: When you see an image that you want to “pin” to your “board,” you can capture it using a “pin it” plug-in and add it to your online profile. Everyone who follows you can view your pinboards, comment on them and add to them if they have permission. They can “repin” the images to their own boards and you can do the same with what you see and like on their boards. Clicking on the image usually takes users to the original source, so a pin of, say, chicken curry, should take you to the website or blog that provides the recipe.

Make sense? The best way to deeply understand how Pinterest works is to join the site and start pinning.

Many users are crediting Pinterest for adding inspiration and creativity to their lives in new and challenging ways. Appold has 17 different boards organized by books she wants to read, recipes she’s inspired to try and clothes she dreams of owning, to name a few. She also has a board of Pinterest-inspired things that she’s actually made: gifts for her children’s teachers, a prayer pot and chore chart for her kids and a Thanksgiving centerpiece. Appold also uses the site to organize ideas she has for her basement remodeling and a bridal shower she’s planning.

“It’s a great creative outlet for people who don’t have time to be that creative,” she said. “It spurs me into action. I never would’ve done these things without it.”

Appold said she’d rather pay for services than do the work herself, but that’s all changing thanks to Pinterest. For her son’s birthday this year, a typical store-bought cake was replaced by an impressive two-layered double chocolate cake surrounded by Kit Kat bars and topped with colorful M&Ms, courtesy of a fellow Pinterest user who had shared the idea on the site.

Other Pinterest users like the site for its abundance of practical ideas. Did you know you can use an empty egg carton to organize your junk drawer? How about using toilet paper rolls to store those pesky electronic cables? Such ingenious solutions leave Pinterest users asking — “Why didn’t I think of that?” — and keep them coming back for more.

“An addiction” is the best way for University of Minnesota student Courtney Reigh to describe her Pinterest use. The 21-year-old prefers “pinning” over Facebook and logs into her account five to 10 times a day, spending 10 to 25 minutes each visit scrolling for images of home decoration ideas, recipes and clothes. She’s expanded her style and wardrobe, and learned to make the “perfect poached egg, all to the credit of Pinterest.”

“I can get lost in that site,” she said. “I check it first thing in the morning, right before I go to bed and everywhere in between.”

Although Broman has always been an active crafter, she joined the “Pinterest Challenge,” a push from one of her favorite blogs to make at least one thing each season from all of her pins.

“You can get caught up in the hype of collecting all these beautiful pictures and telling yourself that someday you’ll do them,” she said. “But for most people it never actually manifests into anything.”
Her definition of Pinterest? “It’s a big, happy, crafty community of people who support each other.”