Travel Back in Time at Downtown’s Edwardian Ball 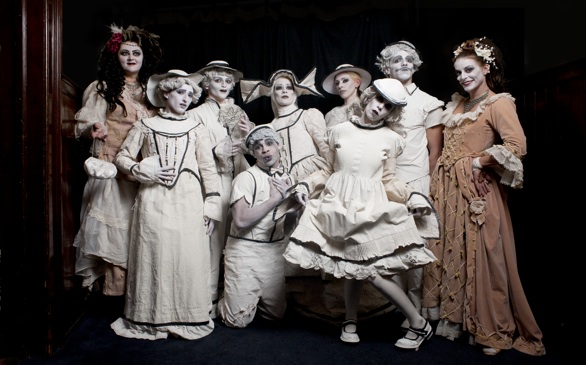 Step into the turn of the 19th century at the Edwardian Ball, where guests will dance the night away in corsets, petticoats, monocles and cravats. This weekend the annual festivities will return to Los Angeles at an event where music, fashion, art and performance come together in celebration of the works of author Edward Gorey. Known for his pieces in prestigious publications such as the New Yorker and his unforgettable animated credits for PBS’ Mystery Series, Gorey is a cultural icon to audiences around the world. His dark illustrations and tales are the basis for the ball, which has been held every year since 1999.

Since its beginnings in the underground scene, the event has expanded over the years into a full-fledged arts festival. This year marks the first ball at a new location. After the famed Music Box closed its doors, organizers have moved the ball from its original location to the historic Belasco Theater, where Gorey's “Iron Tonic (Or, A Winter Afternoon in Lonely Valley)” will serve as the theme.

The popularity of the Edwardian Ball is part of a larger trend of nostalgia for that period. With a resurgence of literary works such as Gorey’s and the tales of  H.P. Lovecraft, audiences have been gradually adapting cultural aspects  of a world during the turn of the 19th century that melds science-fiction and fantasy. There has also been a boom in the current literary market for the genre; Erin Morgenstern’s The Night Circus, a romantic tale of dueling illusionists, takes place in the period, and is currently a national best-seller. With the popularity of these works, it’s no wonder that interest in events where avid fanatics could take part in the culture of a time long has increased exponentially.

Earlier this year, both nights of the San Francisco ball were completely  sold-out. Event founder, Justin Katz, mused, “The demand for this event to return to Los Angeles has been incredible. It’s clear that no one city can contain this celebration, where the old world meets the world-to-be with a tip of the top hat, a cinch of the corset, and a splash of absinthe poured over a silver spoon.”

Co-creators Rosin Coven and the Vau de Vire Society will be hosting, and promise to present guests with an unforgettable night inspired by Gorey’s humorously grim visions. They have once again enlisted Dark Garden Corsetry to provide costumes and DJs Xian (LADEAD) and Delachaux, along with John Brothers Piano Company to provide the music. Shovelman, Oddities & Wonders by Ben Burke, Tall Paul’s Listening Lounge, the Vendor Bazaar & Gaming Parlour and Fashion Show by S&G Clothing will provide guests with entertainment while transporting them to another place in time.

The Edwardian Ball will be held at the Belasco Theater on Sun, Feb. 19. General Admission tickets are $42 in advance. A limited amount of exclusive VIP booths are available and include reserved seating, table service and optional bottle service packages. For more information and to purchase tickets online, click here.