Re:Generation Provides a Glimpse into the Future of the Music Industry 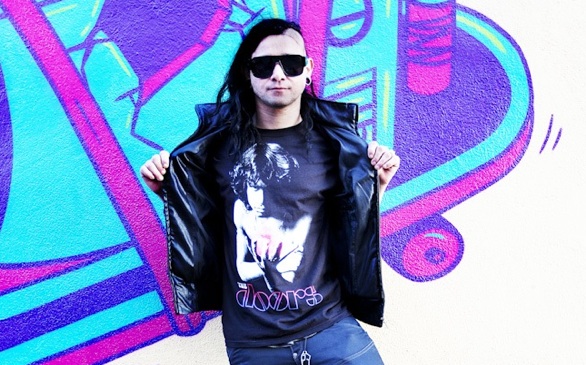 Skrillex is one of the five DJs featured in the film.
(Credit: Brian Nevins)

An experiment in musical innovation and a vision of music’s current evolution, the Re:Generation Music Project is a blending of talent from both yesterday and today. With backing from the GRAMMY Foundation, Re:Generation, the movie, follows five DJs, each from different disciplines, as they are assigned an unfamiliar genre and asked to work with a past legend from that genre. Far more than a remix album or a studio documentary, Re:Generation blurs the lines between documentary and feature film. In the process, it serves to inspire and entertain as audience members are taken through a journey of innovation as it is seen through the eyes of some of music’s most successful artists.

Assigned to the genre of R&B, legendary DJs the Crystal Method embrace the challenge and look to the long-forgotten birthplace of Motown for inspiration. Amidst the backdrop of crumbling Detroit, the Crystal Method teams up with Martha Reeves, best known for the 1965 hit “Dancing in the Street.”

“The R&B genre was definitely one that we were excited about. We grew up listening to lots of the stuff that came out of Motown…Martha’s catalogue alone, was one that inspired us,” says Scott Kirkland of the Crystal Method. A funky tribute to Reeves’s love affair with her hometown, the Crystal Method’s collaboration, called “I’m Not Leaving,” helps the film pick up pace, but is by no means the most impressive project on the roster.

No stranger to live collaborations himself, DJ Mark Ronson felt right at home working with the genre of jazz. In order to pay fitting homage to the style of music he was assigned, Ronson takes his talents to New Orleans where he teams up with Erykah Badu, Trombone Shorty, Mos Def and legendary drummer Joseph “Zigaboo” Modeliste.

Perhaps the most interesting aspect of the Ronson segment is watching as vocalist Badu composes her lyrics on an impossibly short deadline. Faced with only a few hours to come up with lyrics for a song that would debut that night, Badu pulls out all the stops in order to get the song done. It is a rare and inspiring glimpse into the creative process of a well-respected musician. Says Badu of the project, “I’m definitely proud of myself… It wasn’t easy, it was hard; I wanted somebody to shoot me. But we got through it, and it was good. I’m proud of it.”

One of the most seemingly unlikely matches in this film is that of DJ Premier, assigned to the genre of classical music. A complete stranger to the history, theory and appeal of classical music, Premier receives an education on the genre from composers at the Berkelee College of Music. However, despite Premier’s lack of familiarity, he learns to embrace a discipline he would have otherwise written off. Not to mention that he puts together a pretty impressive hip-hop track in the process. Ironically, this improbable match-up pans out to be arguably the most successful collaboration in the film. Says Premier of the experience, “For me, [the toughest part] was the conducting. I felt like I was put on the spot that day.”

When given the genre of country, producer Derek Smith, better known as Pretty Lights, feels as though he has drawn the short straw. Faced with creating something out of a genre he knows nothing about, Smith has to first develop a taste for the style. After receiving a quick education by perusing record stores in Nashville, Smith seeks the vocal talent of Dr. Ralph Stanley and LeAnn Rimes to give his track some soul.

Often comical, it is fun to watch Smith as a young talent attempting to direct unfamiliar legends in a discipline he is unfamiliar with. It is very much a fish-out-of-water type of situation, but one that comes with a haunting electro track at the end.

Says Smith of the collaboration he composed in Nashville, “I realized that there was a huge similarity between what I do as a modern day hip-hop electronic producer and what people were doing with country music and bluegrass 100 years ago…People then were taking old music and reinventing it and evolving it.”

The most seamless match up in the film is that of producer Skrillex, who is given the genre of rock ‘n’ roll. Teamed up with the surviving members of the Doors, Skrillex pairs up with musical idols from his childhood, giving them a lesson on the future of electronic music in the process. The section is almost chilling as one can hear the words of Jim Morrison in the background as he predicts that music in the future will be created by one man with an assortment of machines.

“Re:Generation is combining electronics and musicians, which I think is quite cool. It brings the human into the techno, and you get the best of both,” says John Densmore of the Doors.

In his case, as well as the other collaborations featured in the film, something exceptional has indeed been made as part of this unique music project. While they may not be the defining tracks of our generation, the music featured in this film is indicative of the direction the music industry is taking. It’s up to the listener whether one chooses to embrace it, but considering the musical versatility demonstrated in the film, one can’t help but ask, how could you not?

Re:Generation will be playing in select theaters Feb. 16 and 23. For locations, visit http://www.regenerationmusicproject.com/