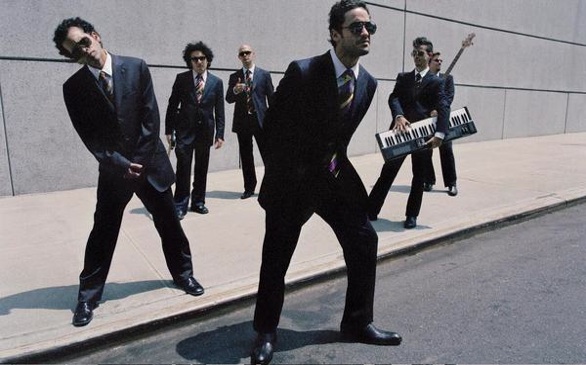 When the multiple-Grammy-nominated band Los Amigos Invisibles took the stage at The Conga Room, it was explosive. These Venezuelan legends played to a sold out audience that absolutely reveled in their musical feats. Not only did they incite their fans with passionate interaction, but delivered high-energy entertainment that was polished, playful and provocative. It's not hard to see why this Latin Grammy-winning group has a following in over 60 countries.

Choreographed dance moves, leaps and lunges electrified the audience, arousing cheers and screaming. The crowd was as much a part of the stage show as the band itself, and had come well-versed with lyrics to every number.

These acid jazz, disco funk, Latin rhythm rockers obviously love what they do, maintaining all their original members since they started playing in the ‘90s. With lead singer and percussionist Julio Briceño, lead guitarist and songwriterJosé Luis Pardo, Armando Figueredo on keyboards, Mauricio Arcas on congas and percussion, José  Rafael Torres on bass and Juan Manuel Roura on drums and percussion, they have put together a musical experience truly worthy of their award wins.

Los Amigos Invisibles displayed musicianship that was off the charts, transitioning from one song to the next without any time lapse. Just as the crowd was about to catch their breath to recover from the high energy of one song, the band was already launched into the next. The audience was wild with enthusiasm, which seems to have translated internationally with sold out shows in the United States, Europe, Australia, New Zealand and Latin America.

Get tickets now if you plan on seeing these Venezuelan virtuosos anytime soon. They're headed to Chicago, Colorado, Texas and Washington D.C. in March certain to take this country by storm.

Suzi Fox is the founder & developer of Artist From The Attic.org, an organization that offers a venue for musicians, writers, actors, artists and others to post their work for FREE for the world to see!