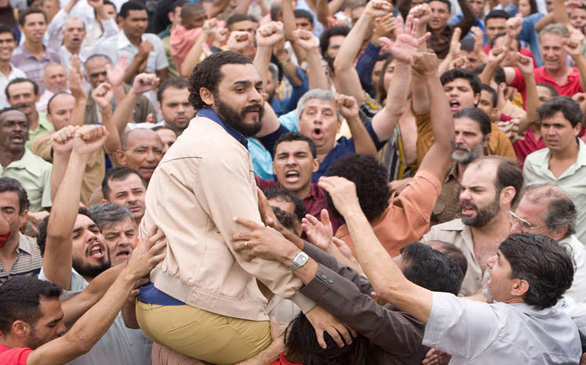 Lula, Son of Brazil is vigorously inspirational and beyond touching.

Based on the book by Denise Parana, this film tells the story of Luiz Inacio Lula da Silva, better known as Lula (played by Rui Ricardo Diaz), a man who was raised in poverty and went on to become Brazil’s president. The film chronicles his life’s fortunes and misfortunes, inspiring audiences with Lula’s story of perseverance, family and honor.

In 1945, Lula was born into extreme poverty, a situation that could cause anyone to feel pessimistic, having to exist in some of the worst living standards known to man. Despite the despair of his surroundings, Lula maintains an unwavering optimism and bright mind. Once his mother (Gloria Pires) decides to move him and his brothers to the populated city of Santos, everything changes.

Lula grows up working and studying. He sells fruit, shines shoes, and does delivery work, performing the duties of a man as mere boy in order to support his beloved family. His father, a cruel alcoholic, is practically uninvolved in Lula’s upbringing, but Lula doesn’t let this affect him.

Love comes and goes for Lula, who marries twice. However, his real passion is his work on the board of a workers’ union. Lula soon becomes the board’s president, and although he attains a lot of recognition for his work, his position leads him to become entangled in political turmoil.

While watching this epic piece of foreign cinema, I could only think how Oscar-nominated director Fabio Barreto (Quatrilho) felt while filming. All the performances, especially that of Diaz, deserve recognition. Pires is also outstanding as the loving mother who cares for and protects her children after bravely leaving her husband.

To date, Lula, who served as Brazil’s president until January 2011, is still known as one of the most influential people of the 21st century, even earning a spot on Forbes’ list of the most powerful people of 2010.

Throughout this flick, Lula’s example of overcoming adversity in both personal and professional ordeals is full of inspiration and memorable touching moments. Lula, Son of Brazil is the best foreign movie I have ever seen.

Lula, Son of Brazil will soon be available on DVD.