Bring on The Darkness: The Darkness is what rock n’ roll is supposed to be: raw, loud and outrageous! 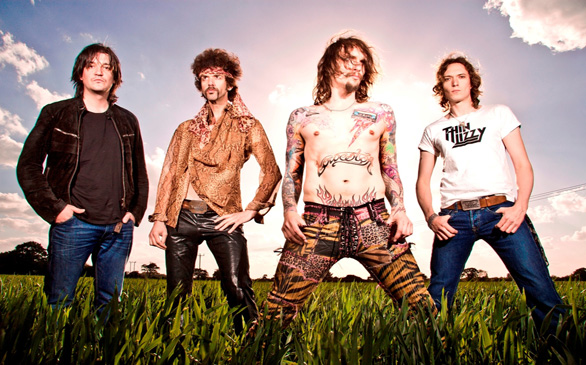 In less than a decade, the British outfit formed in the small town of Suffolk, England has established a more than formidable legacy.  They exploded onto the music scene like a wildfire, and went on to win prestigious Brit Awards, play for sold-out crowds and sell millions of records across the globe.

However, after a series of downfalls including battles with drugs and the pressures of life on the road, the band finally saw its demise.

Seven years later, the quartet has teamed up again with a new outlook and fresh new tunes.  The multi-platinum band is back to give you hard-hitting power rock once more. The Darkness will be embarking on their first U.S. tour since 2004 to promote their third, yet-to-be-titled studio album, and will be performing at the Hollywood House of Blues on February 19.

“We literally cannot wait to get back to the U.S.,” says Justin Hawkins about the upcoming American tour.

The new tour will feature all new guitar wizardry and the ostentatious pyrotechnics The Darkness is well known for. The band will perform music from 2003’s Permission to Land including “I Believe In A Thing Called Love” and “Get Your Hands Off My Woman,” as well as tracks from 2005’s One Way Ticket to Hell and Back and several new songs off their forthcoming album.

Brothers Justin and Dan Hawkins recently spoke candidly to Campus Circle about how the reunion came about, and what they and their bandmates have in store for the world.

“I suppose we fell out really badly,” recalls Dan in regard to his relationship with his bandmates. “During Christmas [Justin] came to see my band. We had a few too many [drinks] and ran through an old Darkness song, and that fueled the fire . I stayed over the Christmas period at Justin’s house and it all happened. It felt natural, otherwise it wouldn’t have happened.”

The coming album is nearing completion, and it’s expected to have the same tongue-in-cheek humor they are loved for as well as the characteristic boastfulness that makes the Darkness one-of-a kind.

“It has to make us all laugh and cry in equal measures,” says Justin about his band’s tight-trouser look and gaudy guitar rock. “There is a sense of humor, and we have to all be masters of it.  There’s no point in trying to out-Radiohead Radiohead, or out-Coldplay Coldplay, or even trying to do battle with younger and better looking bands.  We have to be true to what we are. ”

The new record is a testament to their still-burning passion, and shows that they are learning to embrace both the good and the bad that comes with being rockstars.

“We’re back to square one and focusing on the music,” explains Justin. “We feel like underdogs again and it makes us hungry all over again.”

“At first we were [performing] because we generally loved what we did! I think that went away because we became too ambitious. When we started playing again we did it the wrong way and suffered for it.

Now we’re back to focusing on the music,” he adds.

With his ever-charming and endearing disposition, Justin also admits that he’s been able to better cope with life and any curveballs it throws his way by maintaining a sober lifestyle.

“I’ve been clean and health-conscious for what seems like an eternity,” he chuckles. “My fear about touring is my health, but I’ve established a really good way to avoid certain problems.”

Their second album, One Way Ticket To Hell And Back, garnered less than spectacular sales; some felt the essence of the original Darkness had gone missing.

“On the second one we second guessed what our audience wanted. We guessed wrong; they wanted the weirdness. Writing-wise we weren’t honed, mostly because of time constraints and pressure,” Justin admits.

The band is planning to launch the new album sometime in early 2012, though the date of the release is yet to be announced.

Like they say in Britain, nevermind the bullocks! What’s important is that The Darkness is back and ready to rock the world once again.

“I always used to say ‘We’ll do a brilliant first album, an okay second one, then split up, and then come back with an amazing one!,’” Justin says with a playful smirk.