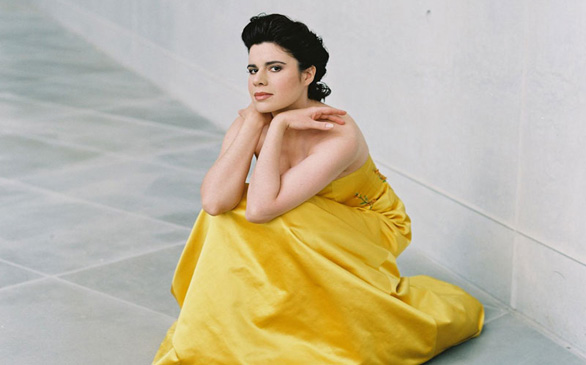 She has a voice like no other female soprano: rich, soulful and voluptuous – perfect for her musical genre. More than just a voice, she is a well-educated college graduate. She is half Puerto Rican and half Cuban. She is Ana María Martínez.

This talented opera singer has accomplished a lot already. Martínez has won many distinguished honors that include the Pepita Embil Award in 1995, the Plácido Domingo International Voice Competition, and first prize at the Eleanor McCollum Awards.

Furthermore, she earned a Latin Grammy in 2001 for Classical Album for Isaac Albéniz's Merlin, which she recorded along with Carlos Álvarez, Plácido Domingo, Jane Henschel and conductor José De Eusebio with the Orquesta Sinfónica de Madrid.

Building off her past accomplishments, Martínez continues to be a talent worth watching. Her current role in Giuseppe Verdi’s “Simon Boccanegra” by the L.A. Opera deserves significant attention. The story behind the show is a classic, and Martínez’s involvement with the performance is crucial for the story because of her particular role.

She portrays Amelia, the daughter of Simon Boccanegra (played by the acclaimed Placido Domingo). The story deals with political power, treachery and Boccanegra’s quest to develop and maintain a connection with Amelia. Despite its antiquated roots, this is a story that everyone can enjoy, no matter what age they are.

“It is a very old story about power, intrigue, the father-daughter relationship and discovering that bond,” Martínez says. “In the case of my character, she is an orphan. In essence, she is used by the exiled family who adopted her to claim an inheritance. It is also a story about love and the need for that.”

“We have a superb cast,” Martínez humbly remarks. “Everyone is very strong in their roles. I feel surrounded by excellence and brilliance, and it’s very inspiring to be around people like that.”

Domingo and Martínez have known each other for many years, and have collaborated with each other a lot in this particular art form.

“The earliest contact I had with him was when I was about 5 or 6 years old, when he sang with my mother in Puerto Rico,” she recalls. “There is a very strong bond there I feel, almost like family.”

Music is like a vital organ for Martínez, having grown up with such a sensational Latin culture that ignites the likes of salsa, merengue and bachata. But she chose opera as a career.

“It is like water or the air that I breathe,” she says.

“Whether it is this career or another one, your cultural back ground is very important because it is the fabric of you, and it forms who you are and how you see the world,” Martínez adds. “The Latin culture is so passionate, from our music to our food; it is very expressive.”

Martínez, who grew up in New York City, attended the Juilliard School and earned Bachelor and Master of Music degrees; she is an alumna of the Houston Grand Opera Studio, too.

What advice does she have for young adults wanting to pursue such a career?

“Go to a good college or university that has a strong music program for undergraduates,” she advises. “It is more enriching.”

Working in opera is extremely difficult and making it is even more complex, but a college degree in music does help.

“They have to dream big,” she adds with a vibrant attitude.

Martínez also urges interested youth to see as many live opera shows as possible. And in all sincere speculation, “Simon Boccanegra” seems to make her absolutely proud of her message.

“It is very dramatic. It is a very powerful story,” she says. “The music is gorgeous. The costume and set are a dream. And one thing I want people to know that are not familiar with the genre is that we are not mic’ed; it is pure technique. We have to be heard above the orchestra and above the chorus.”