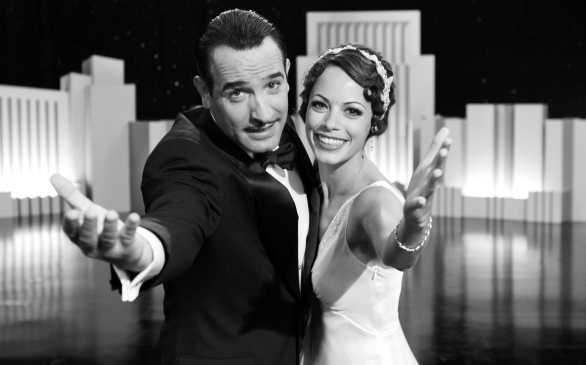 Will The Artist win Best Picture?
(Credit: The Weinstein Company)

Guessing the Oscar winners every year is actually more of a science than a guessing game. There are basically two things to look at: 1) Who are the guild award winners and 2) who has the momentum. I’ve been predicting the Oscars for several years now and usually most categories are in the bag. This year, however, I don’t think everything is as locked down as many prognosticators predict. My gut tells me that the Big Four Categories of Best Picture, Best Director, Best Actor and Best Actress are closer than some might think. The Artist has been winning all of the awards, but I wonder if the crowd-pleasing (and more widely-seen) The Help could sneak in. And while Jean Dujardin and Viola Davis have the momentum, I don’t think that they are that much ahead of George Clooney and Meryl Streep respectively. Though most categories will go to form, I think that we might see a surprise or two this year. Since I don’t have any inside information, however, I’m going to pick the safer bets.

The Producer’s Guild Award isn’t as an accurate predictor of Oscar success as some of the other guild awards, but the past four years have produced the same winners. Not only did The Artist win the PGA Award this year, but it has the all-powerful Weinstein Oscar marketing team behind it. It’s one thing to bet against the PGA, but it’s another to bet against the Weinsteins.

Only six times in the 64-year history of the Director’s Guild Awards has the DGA winner not gone on to claim the Oscar. However, two of those six times have happened since 2000. In 2000, Ang Lee won the DGA Award for Crouching Tiger, Hidden Dragon but Steven Soderbergh won the Oscar for Traffic. Then in 2002, Rob Marshall was honored by the DGA for Chicago, but Roman Polanski ended up with the Oscar for The Pianist. I don’t see that happening this year, so I’m going with DGA winner Hazanavicius.

Hopefully, the other 3 nominees are happy to be there because this looks like a two horse race between Viola Davis and seventeen-time nominee Meryl Streep (breaking her own record, again). Davis’ win at the Screen Actor’s Guild Awards certainly bodes well for her chances, but can you believe that Streep has only won twice, with the last win coming in 1983 for Sophie’s Choice? I wonder if the Academy will want to reward a living legend since she’s gone home from the Oscars empty-handed more times than anyone else. It’s also hard to believe that the Emmy and Tony-winning Glenn Close hasn’t won an Oscar and if Albert Nobbs was more beloved, I might pick Close to win - not just for her acting skills in this particular movie, but also for a lifetime achievement award of continual good work. That being said, I see no reason to pick against the SAG winner, especially since The Help was one of the most successful (ie. most seen) movies of the year.

Clooney was the early favorite, but Dujardin now has the momentum. Not only did The Dujardin win the Screen Actor’s Guild Award, but he too has the all-powerful Weinstein Oscar marketing team behind him. With actors making up the largest voting bloc in the Academy, I wouldn’t bet against SAG - or the Weinsteins.

Spencer has won more than her share of the pre-Oscar awards including the all-important SAG Award. Historically, though, this category is the most likely category to have a surprise winner. The ubiquitous Chastain has also won some critics awards, but if they split the vote, I wouldn’t be at all shocked if Bejo rode The Artist’s coattails to a win or if recent Emmy winner McCarthy continued her quest for the EGOT. That being said, I’m picking Spencer – just as I did on my Facebook page when I left the press screening for The Help.

Plummer has had a long, illustrious career, but has never won many awards, until this year, sweeping the big ones so far. Many feel that he’s overdue, so this year the Academy will reward him not just for his acting skills in this particular movie, but also for a lifetime achievement award of sorts. Though the same could also be said of von Sydow, Plummer won the SAG, so it looks like his year.

I hate to sound like a broken record, but this is another category that seems to be a two-horse race. Going into the Writers Guild Awards, I thought that Moneyball was the favorite, not only since Zaillian and Sorkin are both well-respected, and well-rewarded, in the industry, but that they were able to make a movie about baseball statistics interesting to an audience that might not necessarily care about baseball statistics. With The Descendants WGA win, however, it now has the pleasure, or displeasure if you will, of entering Oscar night as the adapted screenplay to beat. I've bet against the WGA before and lost, so I'm playing it safe this year and am picking The Descendants.

For years, this was always one of the easiest categories to call because Pixar held a virtual monopoly on the category since it was created. Since Pixar doesn’t have a film nominated this year, it’s anyone’s game. If either A Cat in Paris or Chico & Rita were nominated instead of both of them, I would pick that one since they are the artsier choices. Since they are up against each other, I have a feeling they will split the vote. Part of me wants to pick Rango, but I’m picking Puss in Boots since that’s the most Pixar-ish of the nominees.