The Force is Strong at the Discovery Cube 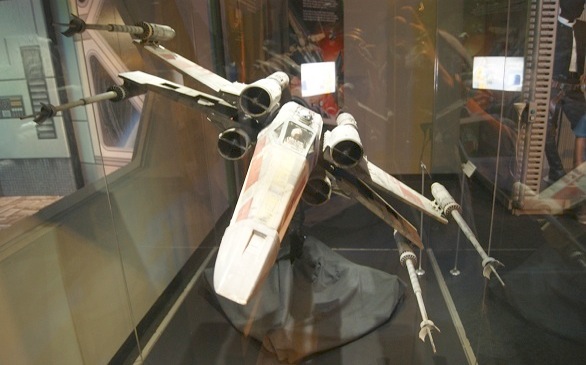 An X-wing starfighter on display at the Discovery Cube.
(Credit: Sabina Ibarra)

Forget going to theaters to see The Phantom Menace in 3-D, and head over to the Discovery Science Center to immerse yourself in real-life Star Wars history. At “Star Wars: Where Science Meets Imagination,” you can explore over 9,000 square ft. of original models and costumes from the series. Experience an interactive exhibit that ties together the technology dreamed up in the film, and current technology’s advancement toward making those dreams a reality.

Presented by Bose with the support of the National Science Foundation, the exhibit is the first national touring program at the Discovery Cube, welcoming Rebels, Jedi’s, Sith Lords and Wookies alike. Guests can explore two major theme areas: “Getting Around” and “Robots and People.” The exhibits are connected to video interviews with filmmakers, as well as scientists and engineers. These videos highlight the process of how our past technology inspired the fictional universe in Star Wars, which has in turn globally impacted ideas for real future advancement.

The “Getting Around” portion compares the spacecrafts in the film to the aircrafts they were inspired by, and to future modes of transportation. WWII fighter jets were the basis of inspiration for X-wings, which in turn have laid the groundwork for cutting-edge vehicles such as Virgin Galactic’s spacecraft for sub-orbital tourism.

In the same area, adorned with actual models of X-wings, Tie-fighters, Star Destroyers and the Millennium Falcon, guests can build their own mini-vehicle at a station using magnets and LEGOs to see the future of hovering transportation on a smaller scale. And next to Luke Skywalker’s Landspeeder from A New Hope, you can ride a real-life hovercraft!

Interspersed between the transportation exhibit and the robotics exhibit are the “Worlds of Star Wars” displays. Iconic costumes from each of the Star Wars worlds demonstrate how the environment in which the characters lived in shaped the look of the characters. Coming face-to-face with Han Solo’s outfit, Princess Leia’s dress and the Darth Vader suit is sure to elicit some fanboy/girl squeals.

From the metropolitan look of Coruscant to the furry wookies of Kashyyyk, the characters of the Star Wars worlds are not unlike us, and adapt according to their surroundings. A centerpiece to correlate Earth’s condition is Coruscant, a planet that is an entire cityscape. It can be see as a blueprint for possible ways for cities to expand by being built around modes of public transportation. Most major cities rely on public transit to support urban form, and with a booming population it is pressing to find alternative ways to expand and control negative externalities to allow humanity to continue to thrive. Hopefully unlike Coruscant, we will be able to salvage our ecology with a little help from droids like R2.

C-3PO and R2-D2 are a welcome sight in the “Robots and People” section of the exhibit. Here you will discover the possibilities of robotics to lead to breakthroughs in medicine and aid in the facilitation of tasks. At one station, you can even program your own robot to move about. Seriously, who wouldn’t want a lovable, self-sufficient R2 unit to store their Rebel plans in? This Rebel would!

An interesting example of technology advancements inspired by Star Wars is the prosthetics display, which eerily juxtaposes state-of-the-art medical technologies and the props used throughout the trilogy. Some neural and muscular implants look just like the ones used for Luke’s prosthetic hand. A body composed of robotic limbs like Vader’s is a possibility due to the ever-evolving robotics limbs in the field.  There are endless possibilities, and just like some big names have lent their voices to GPS systems, perhaps James Earl Jones will record his voice for prosthetic vocals someday.

The most amazing part of the exhibit is actually parked right outside of the Discovery Cube. Where else would you put the beauty that made the Kessel run in less than 12 parsecs?

Stepping into the full-sized replica of the iconic Millennium Falcon’s cockpit is a surreal experience not to be missed. It is a rush to jump into lightspeed and traverse through a realistic rendering of not only our galaxy, but the universe and as far as the remains of the Big Bang!

So gather up your band of friends to go on an amazing adventure at the Discovery Cube, and when you decide to take the Falcon for a spin, don’t forget to override whoever calls shotgun by calling CHEWIE!