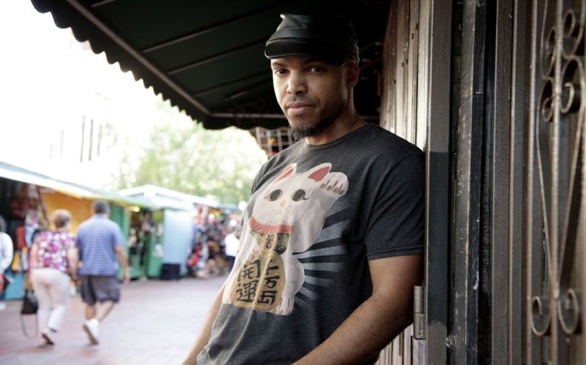 VAN HUNT: LIVE AT THE TROUBADOUR 2011
GRAMMY Award-winning singer/songwriter/producer Van Hunt is about to release his first-ever live album, Live at The Troubadour 2011. “I greatly enjoy adding new experiences to the songs our fans already know,” says Hunt about the set recorded at the West Hollywood venue last October. “I’d like to think this keeps it fresh for everyone. I consider it a compliment when people tell us that no two shows are the same. My role is that of a conductor and a DJ. I try to maintain a brew that emotionally and physically keeps the crowd moving.” Featuring five songs from his latest studio album What Were You Hoping For?, as well as a selection of songs that span his career, Live at The Troubadour 2011 is a digital-only release dropping on March 13.

VANS WARPED TOUR 2012 KICK-OFF PARTY
All the hoopla that surrounds the annual Vans Warped Tour is about to begin, and first up is the kick-off party happening at Club Nokia on March 29. In addition to a press conference, the party will feature performances from rockers Falling in Reverse, Dead Sara, hip-hop punk Matt Toka, two surprise guests and a special screening of the documentary film No Room for Rockstars. Tickets to the party are $12 and available now through Ticketmaster. As for the Warped Tour itself, lots of the participating bands have already been announced, but the main stage headliners are being kept secret for now; those hot acts will be revealed on March 14 at www.vanswarpedtour.com.

ANDY GRAMMER’S TIPS FOR STREET PERFORMERS
Andy Grammer has just released a new song called “Fine by Me” as a follow-up to his gold-selling debut hit single “Keep Your Head Up.” The big sales have affected Grammer’s concerts too, as many of his shows have needed to move to larger venues because tickets were getting snapped up so quickly. But it wasn’t that long ago that Grammer was busking on the streets of Santa Monica, so the singer has compiled “Andy Grammer’s Top 10 Tips for Street Performers” to help other buskers get the most out of their efforts. Grammer advises buskers not to beg, to put a little love into their street stage (use a rug, stool, etc.) and to play short, 15-minute sets. Tip No. 1 is to work out a unique way to cover song, with the thought being that it’s hard to capture a crowd’s attention with an original song. The full list is available on Grammer’s Twitter page.

HALF NOTES
Los Angeles band NO has just released their debut, a six-song E.P. called Don’t Worry, You’ll Be Here Forever. Catch NO at The Echo every Monday night in March beginning March 5. Melodic metal band I, Omega has signed a recording contract with Bullet Tooth. Look for the Upland band’s debut The Ravenous to drop this spring. Pharrell Williams is the executive producer of the new Lightyears E.P. from Mansions on the Moon, currently available as a free download at www.mansionsonthemoon.com. Brass Tax is the stage name of L.A.-based songwriter and multi-instrumentalist Jada Wagensomer, and March 5 is when her Brass Tax Album drops through label Neurotic Yell. Multi-platinum Hollywood rock band Orgy is returning to live performance after a seven-year hiatus; the group’s national tour includes a homecoming show at the Key Club on March 21. Out of the sleepy suburban outpost of Van Nuys races Races; the six-piece indie rock band release their debut Year of the Witch on March 27, and then plays a record release show at The Echo on March 30. Modern rockers Attaloss release their self-titled album on April 10; multiple Los Angeles-area dates will be announced soon at the Attaloss Facebook page. The highly-acclaimed School of Seven Bells has just released Ghostory, and you can hear the new music performed live when the duo plays The Echo on April 19.