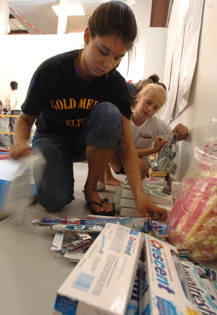 The grief of a man she never had met drove Amber Morlock into action.

The junior at Florida’s Oviedo High School watched on television as Harvey Jackson of Biloxi, Miss., described Hurricane Katrina’s floodwaters tearing his house apart and sweeping his wife away from him. With tears in her eyes, Amber turned to her mother and asked whether she could go to the Gulf Coast.

Instead, Amber, her two younger sisters and friends are collecting hand towels, soap and nail files. The items will go into health kits a relief agency plans to distribute.

In the aftermath of Katrina, America’s youths have mobilized to help, from collecting supplies to raising money – sometimes tens of thousands of dollars – with such things as jump-a-thons and lemonade stands.

But it’s not just this catastrophe. Parents, teachers and demographers say kids born during the 1980s and later are keenly interested in doing their part to change the world.

This young generation – often called Generation Y, echo boomers or millennials – shows more interest in community involvement and the world at large than the cynical Generation Xers or egocentric baby boomers who preceded them, experts say.

Part of the reason is that 24-hour news channels and the Internet are bombarding them with images of desperate people stranded in New Orleans, children orphaned by last year’s tsunami, the twin towers falling on Sept. 11, 2001.

This generation of young people also feels a sense of purpose. They’ve been raised in an age in which parents are more involved in their lives, more protective of them and even tend to place them on a pedestal. They’ve been shuttled from one structured activity to the next. Their schools focus on teamwork. And community service is not just encouraged; it’s seen as a necessity to entering good colleges and getting scholarships.

"They don’t question a need," said Abeer Abdalla, a 23-year-old University of Central Florida junior who already has a long resume of political activism and co-authored a book titled Millennial Manifesto. "I think that’s because of being raised for so many years as a team player. You are not in this alone. You have someone who will stand beside you."

Three-quarters of high-school seniors say they participate in community affairs or do volunteer work at least a few times a year, according to a nationwide poll last year by the University of Michigan. Involvement is even greater among college-age students. A University of California, Los Angeles, survey of more than 289,000 freshmen last year found that 82 percent either occasionally or frequently performed volunteer work. Both surveys compared with results of about 65 percent in 1990.

This generation also knows how to get things done, whether that means persuading corporate sponsors to match its fund-raising efforts or sending e-mail blasts about a benefit. Today’s youth are plugged into all the newest electronic communication, and they’re not all interested in rebelling against the establishment.

"For a while, we were really into the ‘me’ generation. I think we’ve moved on to the ‘we’re all together’ generation," said Carolyn Cappleman, a former associate superintendent for Orange County Public Schools who is now in her second year heading the private Park Maitland School.

Christopher Chew, a 10-year-old fourth-grader at the private school, asked whether he and his friends could collect money for Katrina victims. Administrators not only agreed, the effort went schoolwide. Students raised $135,000 by doing chores for donations. A matching grant of another $135,000 came from an anonymous corporate donor.

Schools throughout Florida have hosted fund-raisers for hurricane relief, from 100 students at Rollins College in Winter Park jumping on a moonwalk to a book drive at Sterling Park Elementary School in Casselberry. Union Park Elementary students have raised $2,700 for the Red Cross by selling 50-cent paper-chain links.

"I think there’s been a push from the adult generation to have them go that way, to be kinder to our fellow man," Seminole County schools spokeswoman Regina Klaers said.

Students say that being required to perform community service can open their eyes to the rewards of volunteering.

Crystal Lee, 19, tutored and volunteered at a shelter when she was in high school partly because community service was required for membership in her National Honor Society chapter, and because she thought it would help her prepare for a teaching career.

"I ... think we see there are other people in the world who need help," Lee said.

"It was kind of a wake-up call," said Geraghty, 23, who started by collecting money for the American Red Cross after the terrorist attacks.

Last year, Geraghty cleaned up debris and distributed ice and water in Punta Gorda, Fla., after Hurricane Charley. Now, his part-time job includes overseeing volunteers at Valencia Community College’s east campus, where students have staffed tables collecting money for Katrina victims and are collecting teddy bears for children who lost their homes in the storm.

"Sept. 11 really has, in some sense, shaped this generation," said Neil Howe, an author and historian who studies generational differences.

The terrorist attacks made parents realize how dangerous the world can be and the importance of educating their children about it, said Gary Keys, father of 10-year-old triplets who, with friends, set up a lemonade stand in their Oviedo neighborhood to raise $1,600 for Katrina victims.

"We were kind of living in a fairy-tale land before," Keys said. "Four years ago, that all changed. I think everybody’s making their kids aware."

Just as she did after Hurricane Katrina, Amber Morlock, 16, remembers watching the television for hours after Sept. 11. She went door-to-door raising money to help victims of that disaster as well.

"My mom’s always ... let us watch the news," she said. "Just seeing things like the people in need has made me want to help."