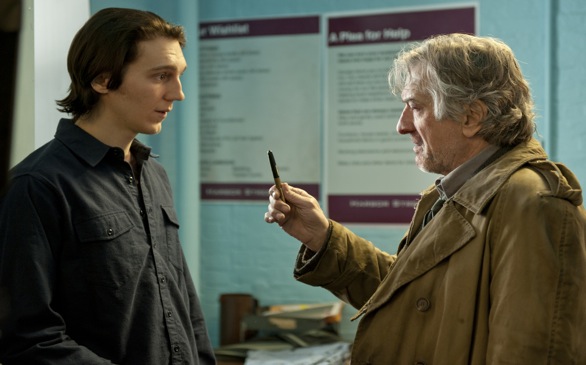 “I am not you!,” screams Paul Dano, who portrays Nick Flynn in the film Being Flynn. His rage and hopelessness are both apparent in this scene, in which he yells at his father, who has just taken up residence at the homeless shelter where Nick works. Despite what he says, most of the film is spent showing us just how much like his father Nick Flynn is becoming.

When the film opens, we are given our first glimpse of Jonathan Flynn, a disheveled older man who seems to think he is a brilliant writer. We also see Nick, who seems to be down on his luck. When Nick receives a strange call from his father asking for his help, he obliges with a reluctant curiosity. Though his father may have only called him because he has a pick up truck and could help him move, Nick can’t help but wonder what has become of his father.

Meanwhile, flashbacks are shown that detail what life was like for Nick and his now-deceased mother, Jody. Nick receives many letters from his father, which his mother reminds him are sent from prison. Jody works two jobs and dates a myriad of men, all of whom act as placeholders for Nick’s father. Julianne Moore, who plays the part of Jody fantastically, makes one of the smallest portions of the film powerful and memorable.

Back in the present, Nick begins to work at a homeless shelter with a friend, Denise, with whom he has a romantic connection of sorts. Denise, played by the talented Olivia Thirlby, suggested the idea, and Nick, who needed to pay his rent, took her up on the offer.

Elsewhere, Nick’s father cannot find a place to live, so he has taken to sleeping in the cab that he drives by day.  Unfortunately, Jonathan is involved in a minor accident, and he loses the cab. So after several nights of sleeping on the streets, he checks in at a homeless shelter –the same homeless shelter that Nick works at.

This turn of events takes the characters to their limits, and tests the boundaries of the broken love-hate relationship that Nick and Jonathan share. Nick’s future is uncertain, and he seems to be speeding down the wrong path, just like his father did. His father’s tantrums and subsequent removal from the shelter certainly aren’t helping his problems go away, so Nick turns to drugs. As his life spirals downward, he is haunted by his mother’s death and his father’s mental instability.

The film’s ending is ultimately bittersweet; however, it beautifully ties together all of the lose ends, and leaves you feeling slightly uplifted and hopeful. Both Julianne Moore and Olivia Thirlby give standout performances, but the energy between DeNiro and Dano is undeniable. DeNiro is practically unrecognizable as Jonathan Flynn, and this movie is a triumph for him in every sense of the word.

Being Flynn is a movie that will shake you to the core, and make you think about your life and the relationships with the ones you love the most. Although most of the movie is extremely depressing, the powerful performances more than make up for the fact that you won’t be able to go see this movie without bringing a box of tissues.