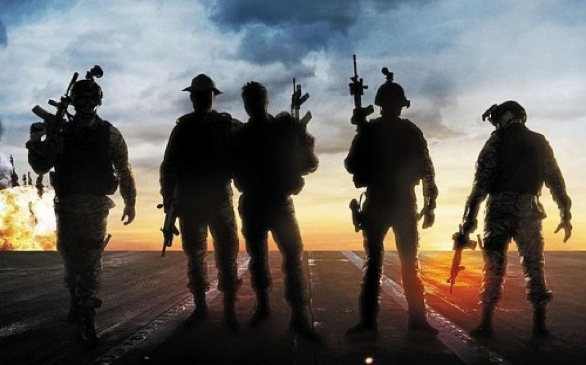 US Navy seals in Act of Valor.
(Credit: Relativity Media)

I just did not know what to expect from Act of Valor.

I had seen trailers, read multiple synopses, and even read what other critics said of this film prior to watching it. In the end, I’m glad I did see it because it pays a worthy tribute to the U.S. Navy Seals.

A group of active-duty personnel star in the movie, which also includes the Puerto Rican beauty Roselyn Sanchez (Rush Hour 2, The Game Plan). The film is very realistic; I felt like I was a part of their battle scenes.

From beginning to end, Act of Valor depicts true stories of what these brave men do to make our nation safe. The opening portion deals with Agent Morales’ (Sanchez) kidnapping in the countryside of Central America’s Costa Rica, a scenario that makes for a perfect beginner to an action-packed film.

An Eastern European black market dealer soon discovers Morales’ undercover work, making him outraged. As soon as the government learns of the mishap, the selected San Diego natives group of Navy Seals embarks on a heroic mission. Filled with explosive thrills and a plot to remember for the ages, this particular tropical adventure is one not to miss.

Throughout the film, I was enthralled by the natural experiences that certain people take on to fulfill our nation and to make it better. We cannot take anyone’s efforts for granted with regards to their military operations.

One thing to keep in mind –a quality that I found unbelievably stunning –is the way in which Navy Seals balance their lives between their family, their duties with the nation and their respective teams.

Act of Valor is an inspiring film that informs audiences about how some individuals put their lives on the line to protect our nation. I feel proud to live in America, and to be protected by men like the ones featured in the movie.

Act of Valor is now playing.