Anna Nalick: Salvages Hope with Wreck of the Day 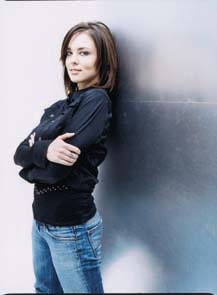 Pop singer Anna Nalick is not like other women her age. The 21-year-old Glendora native won’t be found walking around campus or plastered at clubs every night. She doesn’t drink anymore, she still lives with her parents, and after a year and a half of community college, she realized that she is more interested in zoning out and writing music than paying attention to monotone professors.

"I only studied things I was interested in: sociology, psychology, creative writing, religious studies and music business courses," Nalick says. "I wanted to figure out what I really wanted to do before I went to a four-year. But I got sidetracked and signed a record deal instead."

Who wouldn’t jump at the opportunity to sign with label heavyweight Columbia Records? With demos recorded on a Rainbow Brite tape recorder and assistance from Eric Rosse (Tori Amos) and two of the founding members of ’90s pop-rock band Blind Melon (Christopher Thorn and Brad Smith), Nalick ventured into her first professional deal in October of 2003 and hasn’t looked back since.

Her first single, "Breathe (2 AM)," is on regular rotation at all the big commercial pop radio stations like KIIS and STAR, and music video channels MTV and VH1 are favoring her video as well.

Nalick’s pop songwriting veers into adult contemporary territory, but is anything but boring. Her music is reflective of her own maturity, while her voice is reflective of raw human emotions. Her sound brings to mind a contemporary Janis Joplin, with more stylistic similarities to Fiona Apple and Alanis Morissette.

The title track on Nalick’s recent release, Wreck of the Day, strikes a chord with the hopeful and brokenhearted, her voice touching painfully on the need to let go: "Driving away from the wreck of the day … /Desperately close to a coffin of hope/I’d cheat destiny just to be near you/If this is giving up, then I’m giving up." Meanwhile, songs like "Consider This" burst with creative word play in the vein of Jason Mraz: "I’ll go from bad to worse and later back to better/But I’ll never better bridges that I’m bent to burn."

The songs on her debut release are a far cry from the music she played with her Rush cover band during her high school years. "We had to be really angry and do a lot of screaming," explains Nalick.

But that is not the only time she has done some screaming. Desiring a career in music can be a very frustrating thing, especially when you’re trying to figure out what to do with your life.

"I remember driving down the street and screaming at the top of my lungs because the only thing I felt like I didn’t suck at and the only thing I could imagine doing for a living seemed like a dream that I was going to have to give up on soon," recalls Nalick. "I yelled at the universe and pounded on my steering wheel and one year later I signed a record contract. I’m so glad I stuck to it. I feel so lucky to have my job."

With one big dream now a reality, she has a few more left on the checklist. She wants to publish a children’s book, have a huge, elaborate wedding with the man of her dreams and raise happy, healthy children. She’d also like to make a few more records, take her father to the Grammy Awards and sing a song with Bono of U2.

"I want to stick with what I’m doing now till I’m over it or it’s over me, and then I’ll figure something else out. Or maybe I’ll write and sing forever and be a wife-mom-chef-archeologist-princess-fisherman-forensic scientist-veterinarian too."

Her realistic optimism could do us all some good, and so can her music. But take heed when she says: "I’m just a songwriter; I don’t have any brilliant answers. Pay closer attention to what your heart tells you."

Wreck of the Day is currently available. Anna Nalick’s song "Band of Gold" appears on the Desperate Housewives soundtrack. She will perform Nov. 15 and 16 with Rob Thomas at the Wiltern in Los Angeles. For more information, visit www.annanalick.com.