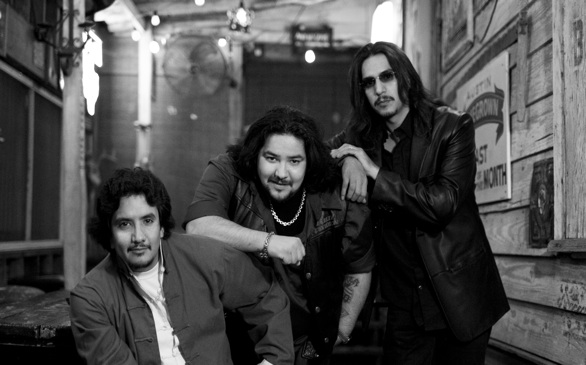 Los Lonely Boys put on a stellar performance at the Santa Monica Broad Stage Saturday night. They opened their show in a manner not commonly done in the L.A. music scene: They acknowledged God first, and then put on an amazing display of musicality that captivated the crowd.

Henry Garza gave a blistering performance on acoustic guitar, while Ringo Garza poured his soul into an astounding audio fireworks display of percussion and drumming. Jojo Garza ripped some amazing riffs on his six-string Rickenbacker bass with effortless ease. These top-flight artists did not hold back from delivering an addictive blend of “rockpango,” Tex-Mex, roots rock and blues. These guys know how to rip it up on stage!

The three brothers have played together most of their lives and it certainly shows. They were as tight a band as could possibly be, creating a momentum of music infused with passion and playfulness. Their sense of humor was engaging, and it was quite obvious they loved performing together and knew how to have fun.

So many times a band has an ego-driven leader, but not so with Los Lonely Boys. Their humble demeanor was felt as they made sure the audience knew they were appreciated, not shying away from engaging in dialogue with their fans. As brothers sometimes do, they stepped on each others’ words at times, yet they were obviously well-seasoned in commanding the stage, and keeping the crowd engaged and wanting more.

It's not hard to see why these Grammy winners had their debut album go double-platinum. They possess the unique gift of putting on an award-winning musical performance while simultaneously making the crowd feel as if they are having an intimate night with friends in their own living room.

At one point, Henry broke out a harmonica and after dazzling the fans with his virtuosity, he threw it backstage into the hands of the guitar tech without even looking. These guys were having a gas onstage. Another highlight was when Ringo and Henry were playing kazoos between the banter that kept the crowd laughing. The two got into a dueling of the kazoos riff when Jojo reminded them they were supposed to be playing a song, or so he thought. Never a dull moment with these three.

Not only is their level of musicianship off the charts, but their vocal blend and rhythms are enticing. Together they put out a rich sound that is intoxicating and irresistible, beckoning audience participation. When they started to play “16 Monkeys,” the crowd quickly joined in to sing along.

When they closed the concert out with their hit song “Heaven” the room went absolutely ballistic, screaming for an encore. They got their wish, this time with Henry going electric, and Jojo and Ringo giving it their all. I don't think it's possible to walk away from this quality of a concert without becoming a fan for life. For future shows check out their website at: http://www.loslonelyboys.com.

Suzi Fox is a freelance writer and also the Founder & Developer of Artist From The Attic.org; an organization that offers a venue for musicians, writers, actors, artists and others to post their work for FREE for the world to see!