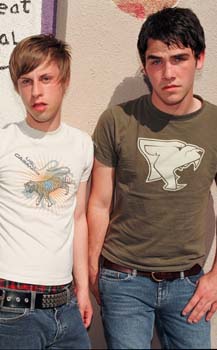 "I like playing in front of people for the first time and seeing all of their confused faces," Idiot Pilot vocalist Michael Harris exclaims a few hours before taking the stage at the El Rey Theatre. Harris continues: "Countless numbers of people that have seen us will approach me after a show and say, ‘Wow, I had no idea it was two of you!’ There’s a lot of people that have heard our band, but didn’t know it was just two people."

Harris and Daniel Anderson, the music man and screamer of the band, have been friends since they were 10 years old. Chemistry like theirs is priceless. However, translating their music to the stage can be somewhat challenging, at least technically. Anderson finds that, "Even though there’s less people, the technical side of it is like 10 times more complicated. We have at any given time like up to 16 tracks coming out, mixed up, and technically it’s just a lot of work."

But, hard work is something the young duo from Bellingham, Wash., does not shy away from having been on tour for over a year straight with the likes of Open Hand and Team Sleep, as well as being part of the Taste of Chaos tour. The duo most enjoys the intimacy of small venues where the crowd connection is literally in their faces, but Harris also likes being a big arena spectacle.

"I don’t have any problems with being on a huge stage and being frickin’ Mick Jagger strutting back and forth," Harris says. "I think it’s a challenge that’s really exciting for me because I just have this mic in my hand and it’s like how many different ways of taking up that gigantic space can I think of in 45 minutes."

While they love to stir up a frenzy as they frenetically flail across, around, and over each other and equipment on stage, when it came to creating their debut, Strange We Should Meet Here, they found the process to be quite organic and natural. According to Anderson: "As far as I was concerned we were just writing really straightforward music, but everybody else thinks you can’t put certain parts in certain places. They’re shocked, and for me it was just very natural. I was never like, oh, this’ll really shock ’em!"

Drawing inspiration from bands like the Talking Heads and Smashing Pumpkins, the two aimed to create an album that Anderson describes as "not boring and every song has a different feel to it, but there is something that strings them together into one work of art." Their blend of soaring melodies and sporadic screams mixed over danceable beats has garnered comparisons to bands like Radiohead and the Cure.

The duo hopes to not only shake up notions of what a band sounds like, but the very notion of what a band is. Anderson says: "The one thing I hope people take away has less to do with music, but more of an overall way of viewing art and presentation of art and what a band is. A lot of the reason why I’m so proud of what we do is because we could make everything a lot easier on ourselves and get a drummer and full band. It would be very easy for us to put our music in a package where it was easy for people to grasp. I hope that after seeing us maybe people will learn that experimentation in music isn’t just the auditory sense of it. Everything about music can be looked at in an experimental way."

The pair has about 20 new songs ready for when they begin work on their next album and recently teamed with Chino Moreno to record a version of "Teenager" that will appear on the new Deftones’ B-Sides & Rarities CD/DVD set for release Oct. 4.

Strange We Should Meet Here is currently available. For more information, visit www.idiotpilot.com.