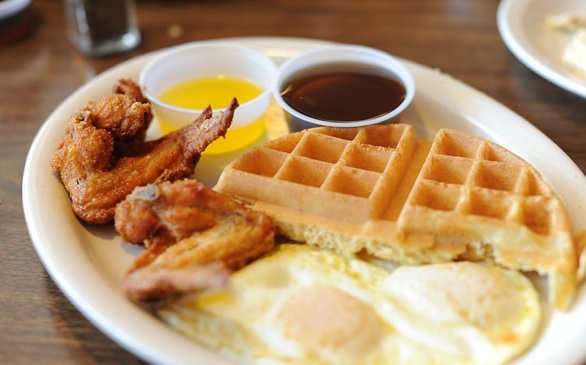 One of the fun things about living in Los Angeles is that on any normal day, you have a good chance of having an actual celebrity sighting--“Hey, there’s Drew Barrymore at Urth Café,” “Is that Justin Timberlake coming out of The Ivy?,” “I think I just saw Kato Kaelin, quick run the other way!” In addition to our human celebrities, we have our architectural celebrities as well—the Hollywood sign, the Santa Monica Pier, and any number of buildings and neighborhoods used in countless movies and television shows.

One of my favorite films is Pulp Fiction, and the last scene of the movie takes place in a really cool, old-school diner. Would it surprise you to learn that this diner actually exists, right here in L.A.? It surprised me. It’s called Pann’s Restaurant & Coffee Shop and, much to my delight, it happens to serve the best diner food in town.

You may have actually seen Pann’s on your way to the airport. It’s been at the same spot on La Tijera Boulevard near LAX, family-owned for 54 years. It’s also distinctive due to its architecture, being one of the last examples of Googie (no, not Google) architecture in the city. If you’re not familiar with Googie architecture, just imagine what a restaurant would look like if it were owned by George Jetson –it’s so futuristic, it’s retro.

So, we’ve established the street cred for Pann’s –major movie star, family owned, cool retro look…but how’s the food? Clearly, I had to try their famed fried chicken and waffles. Like many of you, I use Roscoe’s Chicken and Waffles as the standard-bearer, but Pann’s is a bit different, although equally delicious. Pann’s recipe uses just whole chicken wings, either four or six to an order, and one very large waffle.  The wings are lightly spiced and crispy, and provide a nice salty contrast to the tender waffle. The waffle is a real treat as it is quite sizeable, but maintains its lightness. Plus, the waffle pockets are so deep, they hold a lot of syrup and drawn butter. Yes, drawn butter! Just pour it in and let it work its magic on your arteries. I regret not trying the homemade sausage links and the homemade biscuits, but I only have one stomach, and there was more goodness to come.

Having covered breakfast, my fiancée Kristen thought it would be a good idea to order something off the lunch menu. I searched in vain for the Big Kahuna burger but, alas, it was not to be found (NOTE: That is one of three Pulp Fiction references in this review. If you spot the other two, you win a lifetime subscription to Campus Circle.)

We were actually in the mood for a grilled Rueben, but that also wasn’t on the menu. So we had to “settle” for the 2/3-pound patty melt. Yes, you read that correctly, 2/3-pound ground chuck, grilled onions, melted American cheese, on grilled rye bread. Did you read what I just wrote? Are you in your car right now, headed to Pann’s? Well, you should be.

The fear with a burger that size is that the rye bread will burn before the meat is cooked through, due to the sheer size of the dang thing. Not so at Pann’s. Kristen ordered it medium, and it came out perfectly cooked.  It was juicy, packed with flavor, and just melted in your mouth. That is a TASTY burger!  Add a side order of thick-cut onion rings, and a crispy pickle spear and you have just about a perfect meal.

Unless, of course, you add in one of their real ice cream milkshakes, to put the total caloric intake to about five figures. Seriously though, how can you not order a milkshake in a 50s-style diner? Pann’s offers 15 different flavors, including double chocolate, blueberry, chocolate banana, and the one I ordered, peanut butter cup. I don’t know if it’s worth five dollars, but it’s pretty f-ing good (the Pulp Fiction portion of the review, is now officially over.)

Pann’s is quintessential L.A.—a star in its own right with a great backstory. It’s the Meryl Streep of diners, delivering quality performances on a daily basis.