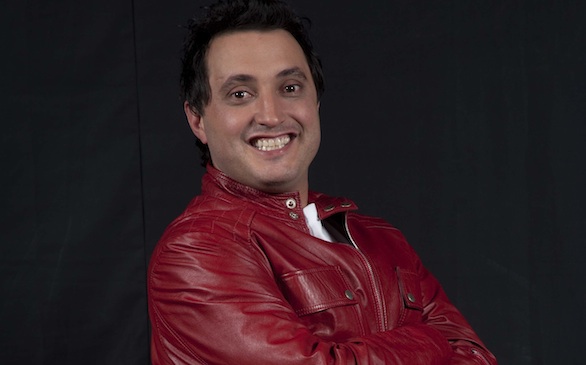 Andrés López is a hero, but he does not know it yet.

A native of the exotic South American country of Colombia, López is bringing his stand-up comedy to Los Angeles, and he promises to produce nonstop laughs.

Currently, López is on tour with “La Pelota de Letras” (The Ball of Letters). The show is a subtle sociological analysis of life in Latin America, especially focusing on life in Colombia between the years 1960 and 2005. Besides having educational and family-friendly content, his work is also known for bringing together disparate generations and nationalities.

“Fortunately, the reception has been good,” he says. “Everyone likes it. It has been a the product of about 13 years of pure observation, and it has broken many records.”

López began his career in school at Universidad de los Andes in Bogotá; he started as a student, but soon became a teacher per the university’s request for him to teach stand-up comedy to those interested in this form of theater art.

“I began in the university as part of a movement,” he shares. “We would do a lot of stand-up comedy on the streets and nearby plazas. Now after 20 years, I have told my own stories, and done monologues little by little in order to collect my material for my comic shows.”

While at the university, López was involved in various events with numerous people, including his establishment of El Mercurio, which became the university newspaper at the time. In it, students were able to express themselves artistically through writings, paintings and pictures.

“It was a place where people could express their ideas,” he says.

So what does he want to accomplish now?

“If I do not design an electric car, then I will buy one to prevent contaminating this world,” he says. “Also, to design an electric engine for airplanes. That way, it will be cheaper to fly. I want to make people understand [that they need] to stop utilizing so much gasoline.”

While he’s travelled all over, López says he especially loves the weather, scenic cities and nice people of Colombia. However, he truly would like to eradicate the horrible history that the region has had in regards to narcotics and its related dilemmas.

“We would be perfect without that,” he says.

With words like this, López is a hero. But he is not done. He has messages for youth striving to be comedians someday.

“The first thing they need to know about comedy is that it has to be honest and innovative,” López advises. “You cannot copy anyone; you have to have your own style. Be very observant, write and read a lot.”

One thing is for sure: López is a pioneer of the genre and possesses enormous discipline in what he does.

In artistic fashion, López (who confessed he is a workaholic, has no free time, and desires to win an Oscar or Golden Globe in the future) has traveled to many borders with his shows. And now that he is coming to L.A. Live, what better way than to spend a night than with truthful, original, innovative, and distinctive comedy?

“We will have a party of comedy there!,” he promises.

Andrés López performs at Club Nokia on Saturday, March 3, at 8 p.m. For more information and to purchase tickets, click here.