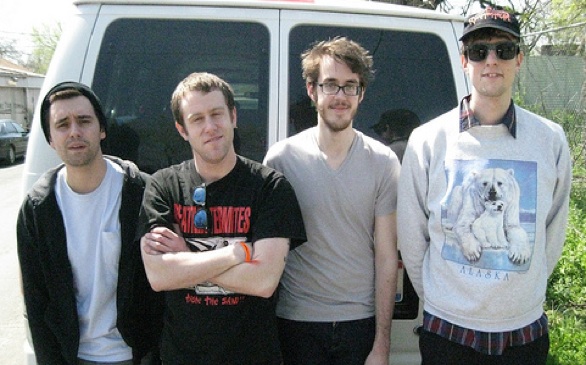 Dylan Baldi, a Cleveland native who is just shy of turning 21, has already toured America, traveled across the pond and has just released his third record, Attack on Memory, with his band Cloud Nothings. Their dirty garage-pop tunes are reminiscent of the early Velvet Underground and The Vines; it’s easy to see why Cloud Nothings have garnered such a buzz. Turning On, the first record to emerge from Baldi’s bedroom, went straight to into the ears of music blog fans across the web. Soon after, Baldi was reluctantly branded lo-fi, but this young artist is only getting started and his creative force is gaining momentum. There’s no doubt that we can expect to see a lot of great things from him.

Like the previous albums, Cloud Nothings’ newest work offers rough-edged tracks based on well-crafted hooks and straightforward pop-noise melodies. The college drop-out has no thoughts on going back to school for now, as his career is taking off and he is relishing the notoriety Cloud Nothings has been receiving. During interviews, he is shy and giggly, but fear is something the singer/songwriter doesn’t have.

He talked openly about his rather unusual experience working in the studio with Steve Albini of Shellac.

“I pretty much knew how it was going to be,” says Baldi. “I wasn’t looking for him to tell us what to do or anything. I just wanted our music to sound like it was produced by him, because it’s a good thing.”

Baldi had previously told Pitchfork that “[Albini] played Scrabble on Facebook almost the entire time” they were recording and that “he probably doesn't feel that his name should be attached to our music in any way.”

Now he’s clearing the air and putting a more positive spin on the experience.

“I know everyone’s talking about the Pitchfork thing like I had a bad time or something, but it was great to work with him,” says Baldi. “He let us do our thing, and he did his, and the album sounds the way we wanted it to.”

Baldi’s demeanor throughout the interview is energetic, his spirit youthful, and his mind optimistic. While he’s getting much more attention these days, he explains that he’s been hard at work for the past two years, and is now finally enjoying the success he’s receiving.

“We just try to have fun and not really think about anything too much, but it's great to see people connect with the music,” says the singer. “We’ve been doing this for a few years, so it’s not like we were a really big band right away. It’s just now that we’re getting more well known and feeling pretty good about it.”

Baldi selected Albini with the hope that he would add his signature “drum sound” to Attack on Memory. You can clearly hear Albini’s influence in the droning sounds prominent on the track “No Future, No Past,” while “Wasted Days” showcases a more bewildered and psychedelic sound.

“I’ve been a fan of the stuff he’s [Steve Albini] done for a while now,” says Baldi. “His songs all have that really specific drum sound, and I was just really hoping we could get something like that on our record.”
Going from a one-man-band to a four piece wasn’t hard for Cloud Nothings. In between chuckles, Baldi explains that it wasn’t really hard to convince his hometown buddies to quit school and follow him on the road.

“It was just people I knew from hanging out in Cleveland, going to shows and stuff. I asked them if they wanted to go on tour with me and they said yes. That’s pretty much it.”

One of the newfound gems of the expanded Cloud Nothings is their manic drummer, known for constantly stealing the live show.

“Our drummer’s like Animal from the Muppets,” says Baldi. “Once he gets onstage he goes crazy. If you like Animal then you’ll like our drummer. He can even play with his head, that's why I like him. He's a really good drummer and I didn't even know. As soon as the first practice came around it was just like, 'What is he doing?' It was great.”

Baldi may be a prodigy, but he didn’t come from a family of musicians. His parents were big fans of music, but his talent and passion are all his own.

“I play a lot of other instruments, but the guitar has probably become the main one for me,” he says. “All the music I listened to at the time [growing up] was guitar-centric. I was listening to whatever my parents played, like the Beatles and Elvis Costello. They’ve always been very support of my decisions, even when I left school to do music full-time. I really wasn’t enjoying myself in school at the time. I wasn’t sure exactly what I was doing, but I knew I wanted to take it further and try to make something out of it.”

The term “lo-fi” is something that Cloud Nothings has been branded with, and their initial release, Turning On, was the first to carry that sound.

“If I would have been able to go into a studio and record that material with a band or something, I would have done that. I just did the best that I could with what I had. And I’m happy with that,” says Baldi confidently.

Cloud Nothings isn’t on the top of any charts yet, but they are certainly climbing their way up and getting noticed everywhere they go, with many critics swearing they are “the next big thing.” When Baldi hears these types of comments, he does his usual childlike laugh and humbly admits he is excited about the buzz surrounding his band.

“I wasn't really expecting anything. I’d never done anything or traveled or ever left Cleveland, so going to Europe and touring the whole country made things that I thought were important seem like little tiny problems. In terms of pressure or dealing with the interest we’re getting, I’m not scared. I’m just excited and enjoying everything that’s happening now.”

Catch Cloud Nothings at Constellation Room in Santa Ana on March 1 and The Echo in L.A. on March 2.