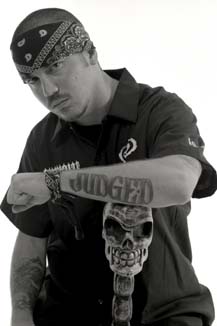 In life, we are judged. We are judged by our parents, our teachers and our peers. We our judged by the color of our skin, by the clothes we wear and even by the music we listen to.

But Judge D isn’t judging anyone – at least not people like you and me. Instead he’s on a quest to motivate and inspire people through his music. So, before you pass any judgment of your own, his name, he says, comes from the word "judged" and is a metaphor representing many things and ideas, but most importantly it’s a symbol for hope.

Live free. Seek truth. Stand strong. These are the words he lives by and the message he seeks to convey.

"My main goal is only half about the music, the other half is to get my message of freedom out," Judge D explains. "I want people to realize that they can exist outside of the system and I’m hoping that I can give people the strength to realize that."

Sure, his aspirations for changing the way people think might seem a bit far-fetched, after all, he’s only one man, but if you knew him you would know that long before a microphone was placed in his hand, he’s been a motivator, constantly seeking truth and challenging the system.

"I want people to realize that we need to unite together and not rely on the government to do things for us," Judge D says.

Born Daniel Rogers, Judge D – or the Judge as others call him – initially burst onto the underground hip-hop scene with his band Victimeyes. When the band broke up he began making regular guest appearances with Kottonmouth Kings and was given the opportunity to collaborate with them on the largely successful Hidden Stash II and Rollin’ Stoned albums.

"The Kottonmouth Kings are like family to me, nothing compares to being able to create music with people that really get who you are, what you’re about," Judge D says.

As for the music, he explains that "the response from fans was great and it was just the push [he] needed."

"At the time, I think I brought another element to the music that seemed to be lacking," he says.

Ultimately, Kottonmouth Kings gave Judge D his own record deal with Suburban Noize Records in 2000. "Judgement Time," the first single he recorded as a solo artist, quickly became the most downloaded track in the history of Suburban Noize – quite a feat for a debut artist.

Although his music follows a similar rock/rap hybrid to that of Kottonmouth Kings, Judge D vows never to put limitations on his music. "I just want to be able to touch as many people with my music as possible," he says. "Each song has a different feeling that can touch people in different ways." By this he means inspiring and giving people the strength to go out and face the world and live our lives.

His debut album Judgement Day, which was fondly received by fans, focused largely on his personal anger and frustrations with society. Now with his sophomore release, No Compromize, Judge D takes things a step further by lashing out at the current political and social injustices of the world.

"When I recorded my first album, I was really angry at the world. I believe that I have grown a lot since then, both personally and musically," he says. "The anger I had on my first album has turned into something much more positive and hopeful, but it’s still just as aggressive."

The significance behind No Compromize is that people shouldn’t have to compromise themselves for anyone. "Never compromise what you know is true, and don’t be afraid," he says.

While Judge D admits that he would love for people to enjoy his music, he hopes more than anything that this album will cause people to stop and think.

"Music is such a powerful thing and, today, it’s not being utilized for what it should be. Instead, it’s all about how many units you can sell rather than the quality of music you produce," he says.

But Judge D is all about quality.

"If anything, read the lyrics," he says. "It’s all about truth and history."

No Compromize is currently available. Judge D will perform with Kottonmouth Kings Oct. 13 at the Galaxy Concert Theatre in Santa Ana and Oct. 20 and 21 at the Key Club in Hollywood as part of the Supporting Radical Habits Koast II Koast tour. For more information, visit www.suburbannoizerecords.com.

Interviews
Benny Blanco on his new song with Juice Wrld: 'It's hard to listen to now'
534 views

Interviews
Jewel reflects on her 1995 debut album, which sold 12 million copies and changed her life
838 views

Interviews
Shamir used to be an ‘accidental pop star.’ Now, the Philly indie rocker has come into his own.
646 views