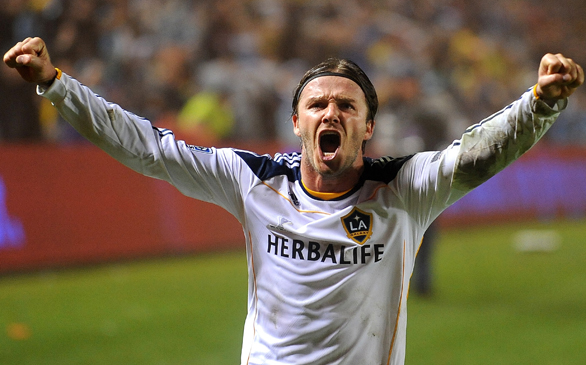 After re-signing with the Galaxy, David Beckham and the team aim to repeat as MLS Cup champions.
(Credit: Wally Skalij/Los Angeles Times/MCT)

Los Angeles is a city of champions. Just ask the Galaxy, who won the MLS Cup last season in expected fashion.

Now, with English sensation David Beckham officially back with the squad after renewing his contract, the Los Angeles Galaxy are looking to double their feat for yet another year.

“This was an important decision for me,” Beckham said. “I had many offers from clubs from around the world. However, I’m still passionate about playing in American and winning trophies with the Galaxy.”

Head coach Bruce Arena is at the helm, and is striving for another year of success. He knows Beckham is essential to that.

“I felt that he was one of the best players in all of MLS last season, and we could not have achieved the success that we did without him. We look forward to trying to replicate that success this season with David once again in a Galaxy uniform.”

Sure, Beckham is back. But so is team captain and American stud Landon Donovan. Donovan Ricketts is gone, but Josh Saunders is defending the net as goalkeeper, and the organization has also acquired Los Angeles native midfielder Kyle Nakazawa.

L.A. also brings back Brazilian midfielder (and the heart of the pitch for the club) Juninho, signed Marcelo Sarvas, while defender Leonardo and forward Chad Barrett return from injury.

The Galaxy finished 2011 with a dominating record of 19-5-10, good enough for 67 points. They claimed first place in the Western standings, but what really matter was the home field advantage they gained since they had the best record in MLS.

What can happen this year? Probably more of the same. The team has a lot of experience of not only playing together for a long time, but individually playing overseas as well. Additionally, L.A. has a lot of young gifted athletes to account for their talented group over the past few years.

One key acquisition the Galaxy made during the offseason was bringing back forward Edson Buddle after he spent a one-year stint in Germany. Buddle holds a solid resume, having played with the U.S. in 2010’s World Cup in South Africa. One of the major reasons Buddle was selected as a member of that team was his scoring ability. With the Galaxy, he scored 17 goals during the regular season while connecting for two more in the playoffs.

“I am thrilled to be able to return to the MLS and to a club that has meant so much to me in my career,” Buddle said. “When I left for Germany last winter, I said that I hoped to be able to one day return to the Galaxy and help lead the club to an MLS Cup championship. That day is today, and I look forward to the challenges that now lie ahead.”

Arena recognizes the efforts and production Buddle brings to the field. “He has been an outstanding player for us in the past, and we look forward to him continuing that success for many years to come,” Arena says.

Los Angeles is filled with hungry talent at forward. Irish striker Robbie Keane is one to keep in mind. Keane is big, physical, and his technique is one of the best on the unit. Donovan, on the other hand, is smaller, but he plays with so much heart that it has always led to success everywhere he plays.

For 2011, he was the machine behind many of the team’s win. Although Beckham played a pivotal role in the Galaxy’s winning percentages, Donovan posted an impeccable year affair with 12 goals scored (led the team), three assists and 23 shots on goal.

Other notable players that the Galaxy will look to for contribution include forward Adam Christman, defenders A.J. DeLaGarza and Sean Franklin, and midfielders Michael Stephens and Paolo Cardozo.

Los Angeles is the favorite going into the upcoming soccer season, and the Galaxy will strongly strive to repeat their success in 2012.

The Galaxy open the season on Saturday, March 10 at The Home Depot Center in Carson against another favorite to win the MLS Cup this year. Kick off versus Real Salt Lake is at 7:30 p.m. Tickets start at $30.