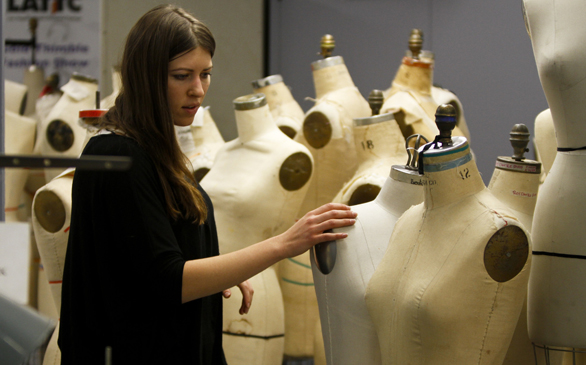 In a bustling part of downtown L.A., a high-rise is teeming with stylish young women in short skirts and full makeup wheeling small suitcases in and out of elevators on their way to class. They’re students at the Fashion Institute of Design & Merchandising, where, down the hall from a flat-screen TV broadcasting a runway show, past a clear case of high-fashion Barbies, two of their peers are consulting with Mary Stephens, the school’s self-described “big boss.”
“This is a very new-looking shape here,” says Stephens, FIDM’s director of fashion design. She is talking to Alejandro Ortega, one of 11 students the school has accepted into its advanced fashion design program this year and one of the 8,000 students enrolled on FIDM’s four California campuses.

Like the hundreds of thousands of students enrolled in fashion programs across the country, Ortega has fashion in his blood. The son of a tailor in his native Mexico, he dreams of becoming a name designer and has moved several steps closer to that dream through FIDM, where he’s learned how to sew and make patterns and design an entire collection.

The 31-year-old Ortega chose FIDM over schools in New York and Barcelona because of graduates such as Monique Lhuillier, Kevan Hall and others who’ve launched successful clothing labels and added to the $340 billion U.S. apparel and footwear industry. Even though Los Angeles may not have the same cachet as New York, it is home to a vibrant apparel industry — and several fashion schools that feed into it.

From $35,000-per-year Otis College of Art and Design to budget-minded, $36-per-unit, Los Angeles Trade-Technical College, L.A.’s fashion schools cater to students of varying aspirations and income levels. Enrollment has remained relatively steady, even during the recession, and all of L.A.’s accredited fashion schools have boasting rights to well-known graduates or attendees. Eduardo Lucero and Rick Owens are among the big names who attended Otis. Los Angeles Trade-Tech spotlights “Project Runway” contestant Sweet P, who took classes at the school.

“I don’t think a kid necessarily has an upper hand by going to Parsons or another New York school versus an L.A. school,” says Steven Kolb, executive director of the Council of Fashion Designers of America in New York. “L.A. has a very important fashion industry. It’s just different than what New York is.

“New York is the fashion capital of the States,” says Kolb. “It’s where business transactions happen, where Fashion Week is, where editorial is. … But what you have in L.A. is a very strong manufacturing business that’s a little bit more of a casual industry in terms of the product. It’s more in line with the California lifestyle.”

The fashion industry is one of the largest employers in California, encompassing everything from pattern making and sewing to design, marketing and retail. At Otis, located in downtown L.A.’s California Market Center, the four-year bachelor of fine arts degree program covers the spectrum of the industry.

Fewer than one third of the students admitted to Otis know how to sew when they start the program, says Aaron Paule, associate professor of fashion and design. But after a foundation year introducing freshmen to photography, fine art, fashion and drawing, students get into more of the fashion nitty-gritty with life drawing, garment dissections, pattern drafting, textile science and digital design.

In their junior and senior years, Otis students begin gathering real-world experience, working on so-called mentor projects with professional designers from top fashion companies in which they begin to design and construct garments from start to finish.

The designs shown at Otis’ year-end fashion show last spring included a handcrafted Navajo dress created for Bob Mackie, a bra and panty set for Diesel, and a silk dress for Max Mara.

“We’re very well connected with major companies, which excites the kids. That’s one of the main reasons they want to come here is to work with the big names,” says Paule, who lists Nike, Hurley, Cynthia Rowley, Calvin Klein and Armani Exchange as recent mentor companies for Otis students.

“I’m a firm believer that if you want to be a designer, you should go to a school that has … access to resources and knowledge that will help you succeed,” says Kolb, of the Council of Fashion Designers of America. “If you want to be a designer, being able to think of a sketch that might look good on someone isn’t good enough. You have to understand the mechanics of making clothes. You have to understand draping, sewing, pattern making, and that’s just the skill set. You also need the experience of how to source fabric, how clothes are produced, where clothes are produced. All of that is just critical to someone being successful.”

The economy may wax and wane, but fashion endures. So, it seems, will interest in joining the industry. At FIDM’s four campuses (L.A., Orange County, San Diego and San Francisco), enrollment has held steady for the last several years at 8,000 students (in two-year associate or four-year bachelor degree programs). Tuition costs $25,000 annually. At Otis, where 172 students (at the sophomore, junior and senior levels) are enrolled in its undergraduate programs, applications have leveled following a 2009 peak of about 200 students.

Enrollment is up at Los Angeles Trade-Technical College, which was founded 87 years ago and accepts all students who apply because it is part of the California Community Colleges System.

More than 3,000 students are enrolled in the two-year fashion design program that costs about $3,500, including books, tuition, tools — and even the fabric they need for their projects.

“These students are in class a little over 20 hours per week, so they’re immersed in one subject matter for eight weeks at a time, five days a week, “ says Carole Anderson, L.A. Trade-Tech’s fashion design department chair. “We keep it real here. We push them really hard and we concentrate on the technical aspects of our industry because no matter what area they go into, they have to know everything.”

Students at Trade-Tech have the option of taking sewing or sketch classes first, followed by a semester of pattern making and creating sizes, also known as grading. By third semester, they’re draping clothes and making advanced patterns.

“The fourth semester is when we start to throw problems at them,” says Anderson, such as working with chiffon and creating swimwear and, as demonstrated in two busy classrooms on a recent Thursday morning, designing evening wear with metal detailing for a special project.

Students were feverishly pinning zippers into place along the backs of deep-cut dresses, adding buttons to waistlines and sewing bits of chain over the plunging necklines of designs they’d be debuting in an upcoming runway show.

“Fashion is always changing. It’s never, ever, ever boring,” says Stephens, FIDM’s design director. “When I wake up, the first thing I think is, ‘What do I get to wear to work today?’ I just love clothes and jewelry and shoes. … Fashion is something that’s inside of you. You can’t ignore it. It’s just who you are, and that’s the students too. It’s who they are and we just help them make it work.”