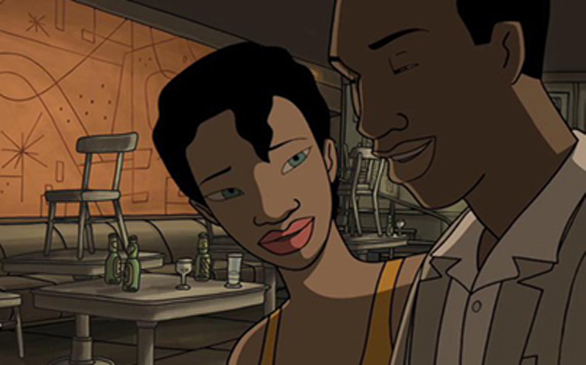 Yes, it is animated, but it looks so real…almost too real to believe.

Perhaps this is because it made me feel as if I were a part of it – its music, art, love story, gorgeous animation and the roots behind it all combine enchantingly in Chico & Rita, which was nominated for the Best Animated Feature Oscar.

Although it did not win, it very well could have. I would even argue that it is the best movie ever nominated for an Oscar that did not take home the coveted award.

The film, directed by Fernando Trueba and Javier Mariscal, is artsy, original and arguably the best film that Latin America has cultivated. More importantly, Chico & Rita excels in inspiration for its tribute to classic jazz from beginning to end – and its finale is a must-see.

Set in the late 1940s and early 1950s, the movie follows Chico (voice of Eman Xor Oña), a rising pianist and songwriter in search of a singer to enter and win a music contest with. He finds his voice in Rita (Limara Meneses), a voluptuous and beautiful woman. They quickly fall in love with each other – propelling a simultaneously intimate and professional relationship.

Both artists’ dreams are fulfilled – the wealth, fame and a life in the U.S. However, it all disappears when Chico is deported to Cuba, and Rita condemns herself to a secluded existence inside of a Sin City motel.

The film transports us to Havana, Hollywood, New York City, Paris and Las Vegas, all the while paying homage to Cuban pianist, bandleader and composer Bebo Valdés (arranger of the film). Other featured musicians include Estrella Morente, Charlie Parker, Nat King Cole, Dizzy Gillespie, Chano Pozo, Tito Puente, Ben Webster and Thelonious Monk. The music, which is provocatively seductive in its own way, becomes its own character alongside the love Chico and Rita possess for one another.

Even though it is just an animated film, Chico & Rita contains a true Hollywood ending; it is a true masterpiece and one of the best-animated films I have ever seen.