The Joy Formidable: Capturing the battle between the eternal optimist and the manic-depressive. 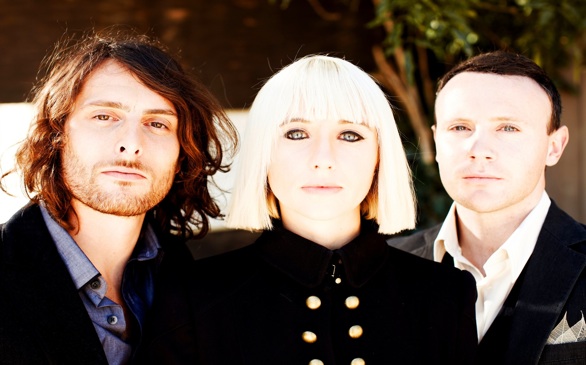 Welsh indie-rock trio the Joy Formidable was first introduced to American audiences in 2010, when Passion Pit invited them to open a pair of sold-out shows at New York’s Terminal 5. Now, the band is lighting up stages across the U.S., promoting their debut full-length album, The Big Roar, which has been getting praises from the biggest stars in rock, including the Foo Fighters, Shirley Manson of Garbage and even Courtney Love.

Back home in the U.K. after almost a year of touring, two of the group's members chat with Campus Circle about the rollercoaster of a journey they have had since their inception in 2007, and how having an unconventional creative process has worked to their advantage.

When speaking of the Joy Formidable’s particular sound, it’s easy to say that there’s something panoramic about it. Their mountainous, fuzzed-out riffs and ferocious, earthy rhythms are shrouded in ethereal haze. Their unique sound is a reflection of where they’re from: childhood friends Ritzy Bryan (vocals, guitar) and Rhydian Dafydd (bass, vocals) grew up in rural North Wales, surrounded by rolling green hills and little else.

“There’s a beauty and a loneliness to the landscape there,” Bryan adds. “We had very few neighbors growing up. I think my parents looked for a house with no neighbors so they could play their music as loud as possible.”

For her part, Bryan loved the isolation. Growing up as an only child, the singer immersed herself in her parents’ enormous record collection and the classical guitar studies she took on at the age of 7.

“I loved playing guitar by myself,” says the blonde bombshell, who is very comfortable letting you into her mind and her creative world. “Back then I was quite introverted with my music. It’s how I occupied my mind and my time when I was growing up.”

She admits that there was always that itch to see the world beyond the secluded paradise that she called home, but at the end of the day, Wales is where the magic happens for her.

“In my teenage years, there was that nagging to be somewhere else, but now that we travel constantly, we have a real affinity towards [home],” says Bryan. “Going back is important because it’s a massive part of who we are as people and artists. It really is essential and central to our writing process. We’re all very much children of nature, and writing our music here is a kind of retreat.”

The Joy Formidable released “Austere” in July 2008, followed by “Cradle” on double-7″ later that summer, and quickly produced an eight-track EP, A Balloon Called Moaning, which they released themselves in the U.K. in early 2009. Having relocated to London and recruited drummer Matthew Thomas, the trio quickly earned a reputation for blistering live performances.

“We love and encourage the beautiful double-pedal,” says Bryan, with a chuckle. “We do lean towards a slightly metal aesthetic when it comes to drums, which makes it very loud and heavy, and all the things we want to be as a live entity. The new album definitely explores those elements, and that’s because of Matt being in the band.”

The trio spent 2009 touring the U.K., Europe and Australia with bands including Editors, Temper Trap and Passion Pit, mastering tiny clubs and festival stages alike. In late April of that year, they teamed with a new label started by Passion Pit’s Ayad Al Adhamy, Black Bell Records, to release A Balloon Called Moaning in the U.S. In their mind, they released a double live album without even launching a released debut album.

“[A Ballon Called Moaning] started life as a tour CD,” explains Bryan. “We showed these tracks so early; they were from our very first tour [when we were] a very new baby band. It was a very happy accident that it got picked up as an E.P. in Japan, and then we added some tracks as we went along and it became a proper body of work. The Big Roar came on the back of that, after we had grown the band and finally had time to consolidate all the tracks.”

On The Big Roar, the Joy Formidable has crafted a remarkable collection of modern rock songs that explore what Dafydd describes as “the possibility of victory in a hopeless situation.”

“The album covers a lot of emotional range,” he says. “It’s captured the battle between the eternal optimist and the manic-depressive.”

One thing about the Joy Formidable that stands out is their constant ability to produce and release music, one song after another after another. One work breeds life unto the next, evolving their sound and documenting their experiences and emotions.

“We’ve done things in a different way,” explains Bryan with her soft, friendly voice. “It’s always been about being spontaneous with the releases, and not sitting on stuff and not holding back. We’ve had a great relationship with our fan base [because] we share things quite quickly. It can be a bit confusing to people, depending on what stage of the journey you joined, and it can be kind of disorienting, but we’re good as long as we continue to create and deliver consistently to our fans.”

Though this way of releasing music is unconventional, Bryan thinks it has worked out well for the band.

“The most important thing for us is being confident in what you’ve written, and not being too precious with things either,” she says. “There’s a lot to say about capturing a moment and channeling it then and there because that’s where that track belongs.”

Bryan comes across as a creative genius that just churns out music like she has breakfast. She loves what she does, and seems to embrace the challenges that come with her lifestyle.

“The main obstacle for us is to make sure we have creative control, and a lot of that has to do with working with people that you respect from the beginning,” she says. “We certainly have that with the people we surrounded ourselves with. I think that when you’ve got that creative control and you’re not puppets to somebody else’s schemes and plans, you’re alright.”

The Joy Formidable will be performing at the Mayan Theater in Los Angeles on March 14.