Pac-12 Tournament Could be Entertaining 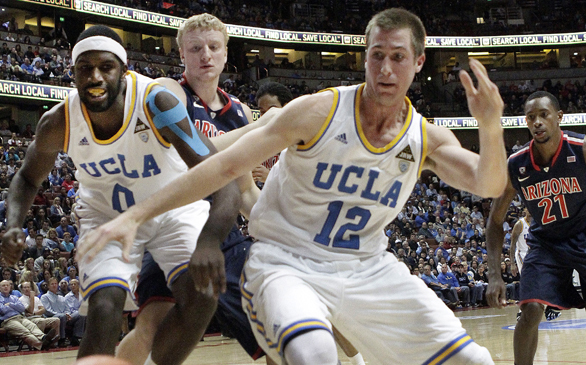 Sunday at Maples Pavilion, we saw a splendid summation of this season's Pac-12 men's basketball competition.

It was sloppy. It was out of alignment. It was brutal. It was strangely compelling. It featured four technical fouls, 26 turnovers and far too many missed layups.

Thankfully, at game's end after Stanford had defeated Cal 75-70, hazmat crews came through to sanitize the building, and no one was hospitalized.

OK, that's the ugly part of the story. Let's look at the beautiful part, moving forward:

Over the past few months, it has been established that the Pac-12 is full of non-outstanding and non-special teams, none elevated greatly above the rest. What does that mean? It means this week's Pac-12 tournament could be the most entertaining in history-much like one of those movies that's so bad, it's good.

In other words, this will be the "Plan 9 From Outer Space" of conference tourneys. So if you plan to watch when it begins Wednesday, make sure to bring popcorn and a sense of humor.

An example of how twisted the Pac-12 has been: Entering last weekend, the conference's first- and second-place teams were Washington and Cal. Both then lost their season finales. That gave Washington the season title, more or less by default. The tournament will be just as uncertain.

"There are a number of teams that could win it," Stanford coach Johnny Dawkins said after his team's Sunday victory. "We've looked at it that way since the beginning of the season, that there is parity in our league and anyone has a chance. ... That includes our team, as well. We think we can compete. But there are 11 other teams that can do the same thing."

Cal did not appear to be one of them Sunday. The Bears seemed half-awake out of the gate and never developed an offensive flow. Their scrappiness brought them within striking distance in the closing minutes - when they slammed the door on their defeat by failing to get crucial rebounds or take smart shots when it mattered.

Stanford was more emotionally charged and ready to play - it was senior day at Maples - so the result was a just one. Freshman point guard Chasson Randle is also obviously improving with each game. Perhaps the Cardinal gathered some momentum that will carry over into later this week.

"We're playing with nothing to lose," said Cardinal forward Andrew Zimmerman. "And that's a great feeling to have ... As long as we do some of the things well we did today, we'll have a good shot."

Cal, meanwhile, is probably still set as an NCAA tournament team. But even with a 23-8 record, the Bears might need to win one more game at the conference tournament for insurance purposes. Most people who forecast the brackets have them slotted as a ninth or 10th seed. But others say just two Pac-12 teams will make the field, with Washington the other likely team. Therefore, if Cal is an early out this week and a team such as Oregon or Arizona gets hot and wins the tournament.

"Nothing is guaranteed," said Cal forward Harper Kamp. "Especially when you come out and play soft like we've been playing."

And here's where it gets interesting. Guess whom the Bears, after their first-round bye, might face Thursday? The opponent will be the winner of Wednesday's matchup between Stanford and Arizona State.

It must frost Montgomery to no end to see the Bears shoved around as much as they were Sunday, given the way Montgomery's former teams at Stanford were known for their physical mindset. He said Sunday that Cal's next few days of practice are more likely to concentrate on bulking up that attitude rather than making tactical changes.

"We've got to be more patient fundamentally, have more attention to detail," Montgomery said.

Translation: Next time in a game's final minutes, the Bears better box out better on rebounds, or else. But give Stanford credit. The Cardinal, with four victories in its past six games, seems to be feeling its oats. No one would be shocked to see Dawkins' team advance past Arizona State and Cal into the Friday semifinals.

Look, we all know that no Pac-12 team is going to reach the second weekend of the NCAA tournament. This doesn't mean we can't enjoy the league's denouement over the next 14 days or so. There are plenty of angles to follow.

For instance, Stanford associate head coach Dick Davey - the longtime Santa Clara head coach and former Cal assistant - is expected to retire as soon as Stanford plays its final game. That could pack an emotional punch. There is the UCLA soap opera to contemplate.

Above all else, this is also likely to be the final Pac-12 tournament at Los Angeles' Staples Center for quite some time. A knowledgeable voice said the event is definitely moving to Las Vegas in 2013. Too bad it's not happening this week. By Saturday's championship game, given the league's quality of play, fans might prefer a Keno game and a stiff drink at the Peppermint Lounge.

For more information and to purchase tickets, click here.