California Bill could Limit where Food Trucks do Business 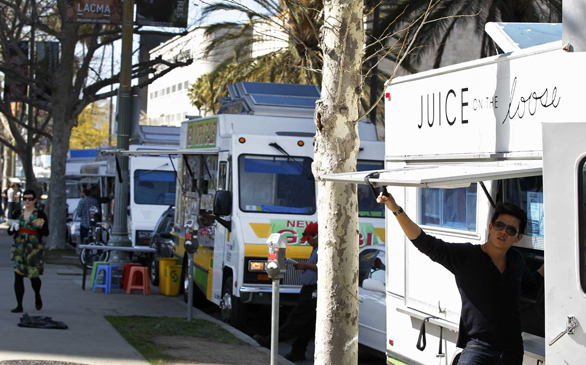 Mireya Ingham follows her favorite food trucks on Twitter so she knows when the movable feasts set up curbside in her East Hollywood neighborhood.

But some recent foodie tweets are giving her heartburn: A state lawmaker wants to significantly limit where lunch wagons can operate, keeping them even farther from schools than marijuana dispensaries.

That could put many of the mobile kitchens out of business just as the industry is surging with creativity. Dozens of colorfully painted trucks have hit the road throughout California, serving gourmet dishes to largely young epicures and becoming nearly as emblematic of the state as surfboards and convertibles.

"It's a shame the state would ... deny people the opportunity to do what they are passionate about," said Ingham, an administrator at a local charity. "So many of the food trucks are doing such good things with fresh foods and ingredients."

The problem, according to Assemblyman William Monning, D-Carmel, is that although trucks specializing in healthy gourmet fare are getting media attention and even their own TV shows, they still make up a small fraction of the vendors.

The other trucks are contributing to an epidemic of childhood obesity on California school campuses by supplying youngsters with greasy burgers, sodas and high-calorie ice cream, Monning said. He wants to ban all food trucks and pushcarts from within 1,500 feet of elementary, middle and high schools from 6 a.m. to 6 p.m. on school days. Pot stores must be 600 feet from schools.

In Los Angeles, boundaries would triple the current limit of 500 feet. In many other cities, Monning's measure would create a new no-go zone. Food truck operators say the restrictions would put large swaths of their market - as much as 80 percent of streets in some places - out of reach.

But customers who want their Korean barbecue, squid-ink pasta, lobster rolls and vegan wraps would still have access to it, Monning said.

"The reality is the trucks that are coming to the schools are pushing low-cost, sugar-sweetened beverages and high-sodium snacks," he said. "The kids aren't paying $17 for a risotto from a gourmet food truck."

Monning chairs the Assembly Health Committee, which has heard from experts that many California kids may develop preventable diabetes by age 30.

"Our effort here is to create a circle of protection for the kids by not allowing the food trucks to park immediately at the ... schools," said Monning, a former professor of conflict resolution at the Monterey Institute of International Studies.

The bill is the brainchild of California Food Policy Advocates, a nonpartisan group that lobbies to improve nutrition for low-income residents. Tia Shimada, a representative of the organization, said it is a logical next step, now that sodas have been banned from campus vending machines and schools are adopting healthier cafeteria menus.

Anti-obesity bills have been something of a fad in Sacramento, and Monning's has a good chance of passing if recent years are a guide. Lawmakers have barred restaurants from cooking with trans fats and required them to post calorie counts on their menus.

Food trucks have been around for decades, parking at construction sites and office buildings, serving hungry workers where no restaurants are nearby. A new wave of them - Lobsta Truck, LA FuXion, Vesuvio, Coolhaus - cater to trendy neighborhoods.

The phenomenon exploded in Los Angeles County, where about 10 percent of the 2,650 trucks offer nouveau or gourmet fare, said Matt Geller, chief executive of the Southern California Mobile Food Vendors Association. The movement has spread to smaller cities, including Sacramento, but it's not everywhere: No food trucks are licensed to operate in Monning's posh hometown of Carmel-by-the-Sea, according to Mayor Sue McCloud.

Monning's bid is also drawing fire from the California United Family Loncheros Association, which launched a "save our taco trucks" campaign in 2009 with the slogan "Carne Asada is not a Crime."

Trying to improve student health is "noble," said Erin Glenn, the group's chief executive, but the legislation (AB 1678) is too broad. It doesn't address, for example, the proximity of stores where students can "buy a bag of Hot Cheetos and a bottle of Coke," she said.