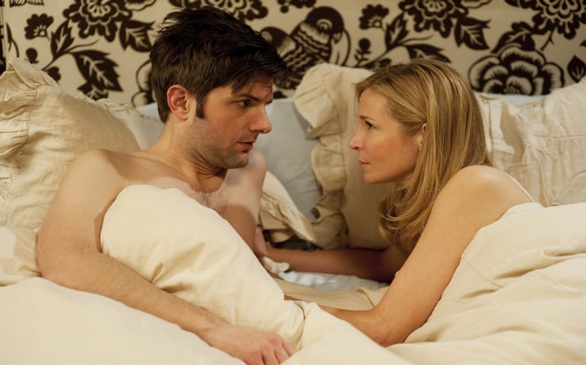 Last year, Kristen Wiig and Maya Rudolph wowed us with their hilarious depiction of a wedding gone awry in Bridesmaids, so naturally, when it was announced that both Wiig and Rudolph would be starring in Friends With Kids, many people became interested in the project. While both women have featuring roles in the film, the main roles are actually played by Jennifer Westfeldt, who also wrote and directed the movie, and Adam Scott, star of “Parks and Recreation.”

Friends With Kids is a movie about growing up. It centers upon a young, tight-knit group of friends that spend most of their time with each other. However, what happens when these friends begin to grow older and settle down?

The movie jumps to four years later, and everything has changed. The group of friends is no longer so tight-knit, and they’ve all become comfortable in their new lives – all except for Julia (Westfeldt) and Jason (Scott). The pair, who are best friends, are unfamiliar with the new routines and priorities that their former group now embodies. The screaming children, the messy houses, the spousal disagreements – it’s all foreign to them. Julia and Jason both make it clear that they do not want that kind of life. Nevertheless, in an interesting turn of events, they decide that they want a child. Not only do they decide they want a child, but they decide to have a child together. Which begs the question: Can two friends with no romantic attraction to one another have a child together? And what happens if their developing feelings get in the way of raising their child?

Friends With Kids is a poignant film that can really appeal to anyone who has ever fallen in love with a friend. Some may doubt Westfeldt and Scott’s ability to carry the film, but they do it beautifully. They both have a chance to shine in their roles, and they convincingly convey the emotional situation that their characters become involved in.

John Hamm must also be commended on his performance as Ben, who is married to Wiig’s character. His portrayal of a man whose marriage is spiraling out of control as he finds himself drifting into a state of hateful cynicism is a situation that many married viewers will no doubt be able to connect to.

The cast of Friends With Kids does an absolutely phenomenal job, and Westfeldt is an expert at writing scenes that feel real and relatable without sacrificing the comedic moments, as is the case with other films of this nature. Because of that, this movie serves as a reminder that, while life may get tough sometimes, there will always be moments that make you smile.