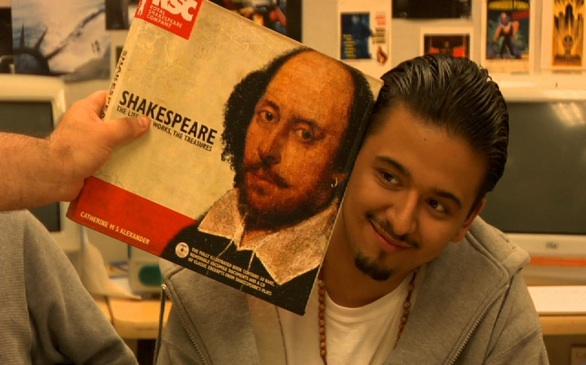 What do a former drug dealer, a football player, a TV writer's son and Kevin Spacey have in common? They all love Shakespeare.

Among the schools featured is a Partnership to Uplift Communities school located in the poor neighborhood of Pacoima, where students are constantly exposed to gangs and drugs. Instead of continuing to follow this path, however, the boys at the school pursue drama, and practice to compete in the Shakespeare Festival.

The students from PUC are the clear underdogs, going up against kids from the prestigious Los Angeles County High School of the Arts, students from the Catholic girls' school Notre Dame and the reigning champions from Hesperia.

The film intertwines footage from practices, the actual competition, interviews with performers and their families, and commentary from Kevin Spacey, Val Kilmer, Mare Winningham and Richard Dreyfus, who are all past participants in the festival.

The stories told are rich and compelling. Since the viewer begins to care for students at each of the competing schools, it is difficult to know which one to root for in the competition.

Despite the film’s effective storytelling and positive message, there were times when there was something left to be desired.

The computer graphics identifying interview subjects often came in far later than they should have. The composition of the interview shots was also inconsistent.

A map is shown numerous times to illustrate where in California the school being profiled is from and where schools come from to participate in the competition. The map, however, is hard to understand and does not actually help the viewer.

Toward the end of the film, some judges from the competition were interviewed, but it would have been more effective to have interviews with the judges earlier in the film, when one of the teachers alleged some flaws with the judging.

However, despite these detractions, the viewer becomes invested in each of the characters, as well as each school’s performance at the festival. It is interesting to see what becomes of the characters the viewer has grown attached to after the end of the competition, and to get the reactions of the actors to both wins and losses.

Despite its few minor flaws, Shakespeare High is an enjoyable watch.