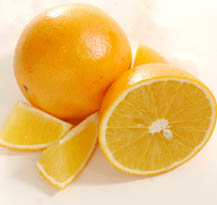 Untitled Document It’s just a humble orange, but Cayucos rancher Jim Miller says it could save your life.

Miller, whose farm produces Cayucos Summer Oranges, is on a crusade to bolster awareness of what’s been called the country’s first health food.

Oranges are packed with fiber and vitamins, and Miller says people should eat more of them. He’s undoubtedly trying to sell his products, but his pro-orange sentiments are shared by many.

In the book Superfoods Rx, Scripps Memorial Hospital’s Dr. Steven Pratt writes that oranges are one of 14 foods that have extraordinary health-promoting effects. When eaten in the right amounts, he writes, they can reduce the risk illnesses including cancers, heart disease and obesity.

"Most people look at an orange and say, ‘Oh, no big deal – it’s just an orange,’" Miller said. "But maybe it should be." He said reading about the obesity epidemic is irritating because he’s seen people shy away from citrus.

"It’s frustrating because even in all those stores, I’m still out-producing what people are selling," he said, noting that his oranges are sold in 600 Vons and Albertson’s markets across California.

Maybe it’s the mess. Miller advises orange eaters to peel from the "button" end – where the stem was – in order to minimize the dribbles.

The potassium helps maintain a healthy blood pressure, and nutrition experts advise patients to cut down on sodium and increase their potassium intake.

More refined foods, she said, are the opposite.

Fiber is known to help promote cardiovascular health and digestion, while folate can reduce the risk of birth defects and breast cancer, Berner said.

Oranges are also rich in Vitamin C, which has a number of health benefits.

The scientific community is still relatively undecided on how vitamin C can help those suffering from the common cold, but large amounts of it before a cold strikes have been shown to shorten the duration of the illness, according to a 2003 article in Nutrition Journal. It also appears to help prevent cancer.

Berner said people are drinking less and less orange juice – same with milk – and are instead replacing those beverages with sodas, which has deleterious health effects.

Oranges are sugary, which can promote tooth decay, but Berner said it’s not that bad.

"The effect on teeth is a combination of time of exposure and how it sticks in your teeth," she said. Drinking juice is a lot better than gnawing on something, then having to floss it out later.

Pratt writes in his book that oranges can be substituted with lemons, grapefruit, kumquats, tangerines or limes.

But for Miller, the magic is still in that juicy seedless Valencia – the classic treat at half-time on the soccer field.