UCLA and USC: Two Basketball Teams in Need of an Off-Season 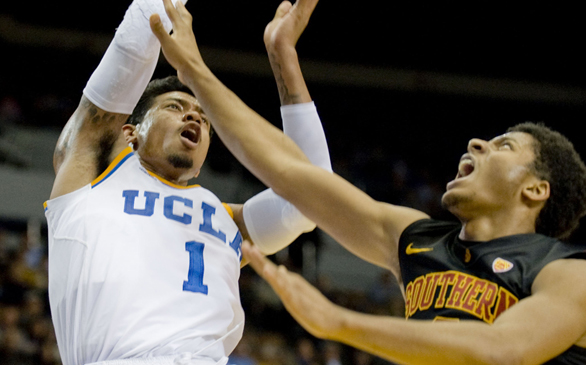 Both USC and UCLA have had a below par season in men's basketball.
(Credit: Michael Goulding/Orange County Register/MCT)

UCLA and USC both have men's basketball programs badly in need of an off-season. One will get there soon enough.

The Bruins and Trojans play Wednesday afternoon at Staples Center in the first round of the Pacific Life Pac-12 Conference tournament. Few give UCLA any chance winning four games in four nights to qualify for the NCAA tournament. Fewer believe USC can win even one game.

"Maybe this season has been a little disappointing," UCLA senior guard Jerime Anderson said. "We can't look at it like that. We have to win games and make a run in this tournament."

The first week of April is eagerly anticipated by UCLA basketball fans, though it has nothing to do with the national title game on April 2.

Across town, USC has had nearly as many bad breaks as fastbreaks this season. The Trojans lost five players to injuries, leaving them with six on scholarship as the team plummeted to a school record for losses.

"It's been very difficult for our players," Coach Kevin O'Neill said. "But the bottom line: I see a lot of positives moving forward for us. A lot of guys got a lot of time they wouldn't normally have got."

The Bruins were picked to win the conference but finished tied for fifth. The season began with the Reeves Nelson saga. The team's leading scorer was suspended twice and finally dismissed from the team. More recently, a Sports Illustrated story portrayed the program as unraveling from within.

UCLA responded by beating Washington State and Washington, giving the Bruins a confidence bump. The question remains whether the Bruins have the depth - or, in center Joshua Smith's case, the stamina - for a four-night engagement.

Winning the tournament, guard Tyler Lamb said, would allow the Bruins to put a difficult season behind them. "It will mean so much to us, because this team has been through a lot," Lamb said. "It's not over."

When it is over, there seems an easy fix to what ails the Bruins.

UCLA has already signed Kyle Anderson, a 6-foot-8 guard, and forward Jordan Adams. The big prize is Muhammad, a 6-6 forward who is considered the top recruit in the nation.

Muhammad has UCLA, Kentucky, Kansas, Duke, Nevada Las Vegas, Arizona and USC as his final teams. But the NCAA is reportedly looking into financial connections between two men and Muhammad's family, and has made schools aware that it could affect his amateur status.

An attorney for Muhammad told the Las Vegas Review-Journal, "There's been no accusation that he in any way has done anything wrong."

Howland, who cannot speak specifically about recruits, said that UCLA has not backed off on recruiting any player in the last two weeks.

"The kids we have signed and are involved with are great," Howland said. "They are among the best ever to me, in terms of being players and being young men of character."

USC remains in the Muhammad derby, though it is considered a longshot. Regardless, the Trojans expect to revamp their roster next season.

"We saw some improvement in some guys that hopefully down the stretch will pay dividends for us when we add nine new guys next year from injury, transfer and recruiting," O'Neill said. "As unexcited as I am about what just happened this past season, in this journey, I am extremely excited about our journey moving forward."

Special Feature
What would sports look like with smaller or no crowds?
164 views

Special Feature
He made most of his gap years: Capehart, 85, gets degree from USC after starting in 1952
193 views

Special Feature
The Pac-12 at a crossroads: morality or money?
1,084 views

Special Feature
Taking in a LAFC game is good for the sporting soul and stomach.
1,517 views