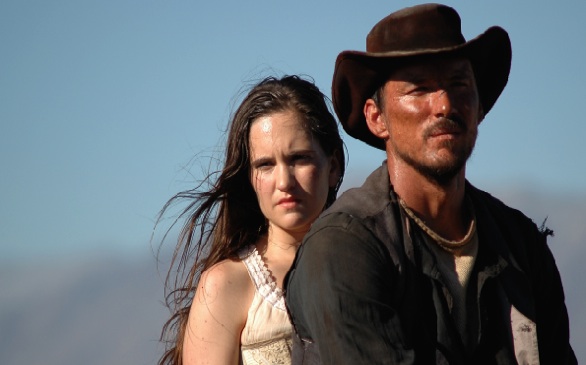 First-time feature film director Mike Wallis’s Good For Nothing is a new take on the classic Western genre.

The film follows a budding romance between a nameless outlaw (Cohen Holloway) and Isabella Montgomery (Inge Rademeyer), the beautiful English woman he kidnaps.

The outlaw tries to, as he calls it, give Isabella a “poking,” but is unable to do so due to some performance anxiety. Confused, the outlaw drags Isabella with him to doctors and medicine men to solve his problem.

But it wouldn’t be a real Western without some gun slinging of course. During his first visit to a doctor, the outlaw kills a man in the town. The town members seek vengeance and follow him and Isabella, who they mistakenly believe to be an English whore and his accomplice.

Isabella and her captor must work together in order to survive, and in doing so form a strong bond.

While this modern take on a traditional theme has potential, it flounders in some aspects. The film tries too hard to be artistic, and in doing so loses some of the ruggedness that often makes Western films so enjoyable.

The outlaw makes his appearance within the first few minutes of the movie, but does not say his first line (eloquently stating, “My dick’s broke”), until 17 minutes into the film. Snappier dialogue earlier in the movie could have aided the storytelling.

Wallis’s decision to keep talking to a minimum is not without merit, as it does get across the idea that the outlaw does not associate with many people or care to be anyone’s friend, but at least one short bout of dialogue earlier in the film would have gone a long way.

Instead of being a quick-paced Western movie, the film was long and drawn out, largely due to this lack of dialogue.

Despite the shortage of speaking time, Rademeyer does a fair job in her portrayal as Isabella. She plays her role with the right amount of innocence and sass for the viewer to see why the outlaw develops feelings for her.

Holloway has a background in comedy, and subtly brings some humor to his character, but these moments are few and far between. More meaningful conversations would have made his character more empathetic.

The dialogue that does shine comes from the town members who are chasing the outlaw and Isabella. These scenes are not only well-written, but provide some much needed comic relief to the mostly serious film. The film could have benefited from having more of these kind of scenes.

However, the movie wasn’t all bad. Where the acting and script failed, the cinematography succeeded. The film was shot in New Zealand, and when Isabella and the outlaw ride a horse through vast and open terrain, the camera pans to shots of truly gorgeous mountains and scenery.

While Good for Nothing showed some promise and offered an interesting take on a Western, it ends up falling flat. Wallis is no doubt talented, but he needs some help in the dialogue department in order to live up to his full potential.

Good For Nothing releases March 9.