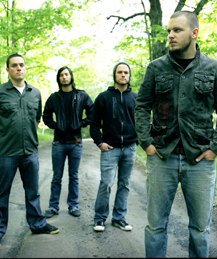 Radiohead. The Beatles. Thrice …? While there may be a seeming discrepancy in cultural impact and iconicity between one of these bands and the other two, Thrice is quickly becoming the band that plans to change rock for the better and change your life while it’s at it.

Hailed as geniuses by their fans and regarded with respect by their musical peers, Irvine natives Dustin Kensrue (vocals), Teppei Teranishi (guitar), Eddie Breckenridge (bass) and his brother, Riley Breckenridge (drums), didn’t set out to be catalysts for change. That said, if they can make a difference by being their everyday selves, they’re certainly not opposed to it either.

"Nobody in this band was like, ‘Let’s start a band and be the biggest band in the world’ or, ‘We’re going to be in a band and be famous and sell a million records,’" says Riley, the elder of the two Breckenridges, on his band’s humble beginnings.

Granted, the days of Thrice’s first Chain Reaction shows and the self-release of its first albums are long gone, but nevertheless, the band has maintained a humble appreciation for all it has. "We just want to get our music out to as many people as we can, doing it the right way, being honest and being the same people we were when we started this band," says Breckenridge.

That devotion to honesty has always been a defining facet of the band’s identity and certainly carries into its upcoming release, Vheissu, despite the cryptic nature of the title.

"We wanted a one-word title that didn’t have any connotation to it," says Breckenridge.

"You think of How to Dismantle an Atomic Bomb or Three Cheers for Sweet Revenge, it conjures up something. With Vheissu, nobody knows what the hell it means and you can go into listening to the record without a preconceived notion of what it is or what the theme is."

As far as how Vheissu will compare to the band’s previous album and major label debut, The Artist in the Ambulance, Breckenridge is confident his band has taken a step forward in its musicianship. "It’s definitely the most diverse," he says. "The mellow parts are much mellower and the heavy parts are much heavier. Our use of dynamics in songs is a lot better than it’s been in the past. We really focused on setting a mood with the tone of the song, and I think it’s a lot more akin to a soundtrack or a movie score."

Despite the members’ growth as musicians, Breckenridge is also very aware of the potential for backlash against the new album. "It’s different enough that I think it’ll piss some people off," he continues. "But I think if people are willing to grow with us and their CD collection is more than just Band X and bands that sound like Band X, that they’ll be into it. But if people are closed-minded, that’s fine, there’s tons of other bands for them."

As such, Breckenridge and his bandmates remain undeterred, and why shouldn’t they be? Of all the bands that played on this summer’s Vans Warped Tour, you might be very hard pressed to find another with as intellectually inclined a fan base as Thrice.

"You see some merch tents on [Warped Tour], and girls will walk up like, "sign my tits, sign my ass," and we don’t get that and it’s cool that we don’t get that. Some people want to be like Mötley Crüe and want to get wasted and see boobs, but that’s never been a goal of ours, and I think we take pride in the fact that our fans are intelligent and don’t want to take their shirts off.

"When I meet somebody after a show, usually they’re like, ‘What books are you reading lately? What are you listening to?’" Breckenridge says.

So where exactly does Thrice fit into the proverbial big picture and grand scheme of things? According to Breckenridge, "We’re not willing to compromise what we do to be successful and we don’t want to wear costumes or portray an image that we’re not. We just want to be ourselves and write songs that matter to us and that move us. Our goal as a band is to be true to ourselves and hope that there can be a band that’s normal, honest, good-hearted people making music that they love and can be successful."

And if there’s not yet a place for such a band in mainstream rock, we can rest assured Thrice will be the band that makes one.

Vheissu will be available Oct. 18. Thrice will play with Underoath, the Bled and Veda Oct. 7 at the Bren Events Center in Irvine and Nov. 21 at the House of Blues Sunset Strip. For more information, visit www.islandrecords.com/thrice.