USC's O'Neill will Return for Another Season 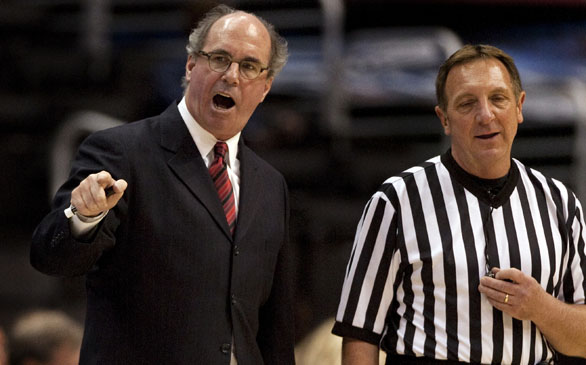 As Kevin O'Neill arrived at the locker room after Wednesday's 55-40 season-ending loss to UCLA at Staples Center, a reporter asked USC's coach if he'd been informed whether he would return next season.

Then he jokingly checked the text messages on his phone just to make sure.

Though the Trojans won only six games and lost a school-record 26, Athletic Director Pat Haden reiterated that O'Neill would be on the sideline for a fourth season.

"Kevin O'Neill is our basketball coach and we're looking forward to having a good year next year," Haden said in a phone interview after the Trojans lost to the Bruins for the third time.

"He was dealt a very difficult hand when he took the job, and this year with so many injuries. We're expecting a marked improvement."

O'Neill's record with the Trojans is 41-55. But Haden said the coach was fulfilling some goals "important to USC."

O'Neill and his players are expecting the same after suffering through a season that went sideways before it began.

Guard Jio Fontan's knee injury during the Trojans' summer exhibition tour to Brazil was the first of five season-ending injuries suffered by starters or players expected to be key contributors.

USC also reportedly is in the running for Shabazz Muhammad, regarded as the top high school recruit in the nation.

O'Neill is aiming for a return to "relevancy."

"As losses and as injuries mounted, we became irrelevant," he said, "and that's not something we want to be as a program ever again."

Asked if O'Neill must win a certain number of games or achieve a particular milestone next season, Haden said, "No."

But O'Neill has an idea of what's expected for him to coach the Trojans beyond 2013.

"We have to win," he said. "I don't know the number. I would think we have to be in the mix to be an NCAA tournament team."