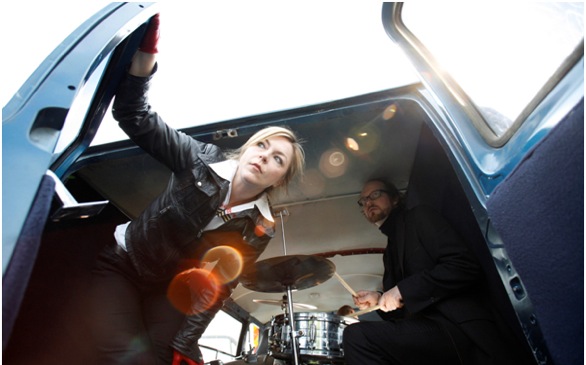 Foreign film fans rejoice: The toe-tapping, eye-catching musical experiment, Sound of Noise, is prepping for release in the U.S. Sound of Noise is the story of Amadeus Warnebring, a tone-deaf detective born into a family of famous musicians. Outwardly despising music himself, Warnerbring is faced with his greatest challenge as he pursues a terrorist band of guerilla drummers.

Quirky, conceptual and highly cerebral, Sound of Noise is one of the most unique pieces of cinema to be seen this year. The film moves with a certain sense of electricity, with its focus on rhythm and interjections of humor. The resulting mood is a fine balance between apocalyptic severity and light-hearted irony.

The project began as a short film entitled, Music for One Apartment and Six Drummers. Appearing as a plot-less experiment in multi-tracking married with cinematography, the video quickly went viral, leading its creators to elaborate on the concept. Since that short was released in 2001, filmmakers Ola Simonsson and Johanne Stjarne Nilsson have been perfecting their approach by adding dialogue and storylines to their films. By the time they were ready to pack these ideas into one feature film, it seemed as though there was simply too much to fit on the screen.

“We spent several months hunting and collecting and recording sounds, all kinds of sounds from heavy machinery to hospital equipment,” says Nilsson. “That ended up as a huge library of sound files, some 20,000 files, that were turned into music.”

The process of recording the soundtrack took a full year before production began.

“We had to develop the music in parallel with the script,” he explains, a method that became complicated.

“Discovering the music revealed flaws in the story, and we wanted the music to really push the story forward.”

The story they ended up with is a reflection of what the directors felt was a successful melding of the sounds and the script.

“We found something we really liked, [which was] the combination of music and crime,” says Simonsson of his work.

While the film does have a plot, sound is most definitely its focal point. Everything about the soundtrack, from the musical numbers to the sound effects, was meticulously composed and bears with it a unique style. Particularly noticeable is the use of silence, which serves to heighten emotion and move the storyline forward.

In addition to the elaborate soundtrack afforded by the film, the story itself is quirky balance of impending doom and laugh-out-loud humor.

Nilsson explains that this is a result of his and Simonsson’s creative process. “We always reminded each other of the importance of having fun while we work,” he says. “Balancing that fine line is an important key.”

That balance is reflected in the movie itself. While the majority of the film bears an air of severity, the tension is relieved by eccentric characters, including the very amusing terrorist drummers, and well-placed puns.

Highly entertaining and most definitely out of the ordinary, Sound of Noise is most definitely worth your time. While it may not be anything Oscar-worthy, it’s nonetheless a truly fun film to try and wrap your brain around. Just don’t try too hard, you wouldn’t want to lose the beat.