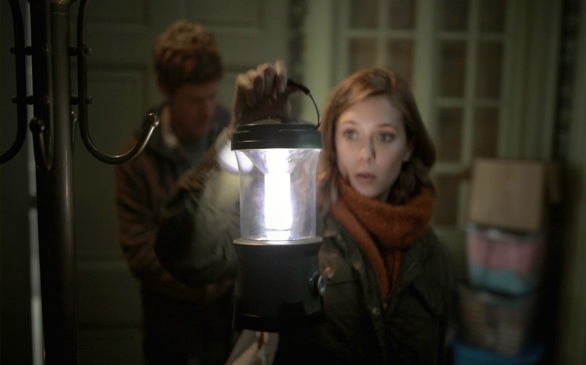 Husband and wife duo, directors Chris Kentis and Laura Lau, are set to release their newest thriller Silent House on March 9, putting their own unique spin on this remake of the Uruguayan psychological horror film La Casa Muda. The film tells a story in one continuous camera shot, and takes you on an 88-minute distressed ride in real time.

Sarah (fresh-faced Elizabeth Olsen), her father John (Adam Trese) and her uncle Peter (Eric Stevens) revisit their old summer home, which has been ravaged by time, intending to fix it up and get it on the market to sell. While there, Sarah encounters odd sounds and visions.

As a backdrop and the primary set, the house creates the perfect amount of unease and mystery. Down to the details of the wallpaper inside, the narrow hallways and multiple floors, you know that things aren’t quite right. The creepy neighbor who keeps visiting and the odd interactions between everyone helps build the audience’s anxiety.

Kentis and Lau are no strangers to creating suspense, keeping viewers on their toes throughout their previous film, Open Water. They manage to amp up the terror in Silent House as well. Focusing on Olsen throughout, there is not a single second where she is not on screen. You feel claustrophobic and frightened along with her as she searches for a way out.

Strong camera angles intensify what Sarah, with her innocent face and doe-like eyes, is feeling. Prepare to get drawn in and clutch whoever is close to you. Regrettably, there are hints throughout the entire film that lead you to the ultimate ending, which is a bit disappointing.

However, Olsen is perfectly cast and holds the film together. She is strong and vulnerable, while at the same time getting across her sheer terror even in the quiet moments. Unfortunately, weak dialogue and supporting actors dim the magic of the movie as a whole.

Nothing new is added to this film that hasn’t made us all jump before, but the continuous shooting does make it unique. You never really see the villain, which makes it much more paralyzing. What you see leaves a lot up to interpretation, until the end of the film when all is revealed.