Boys Night Out: Cause a Train Wreck 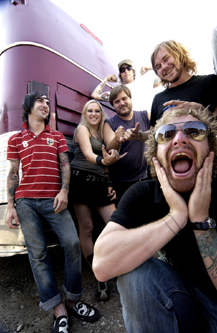 In most cases, you wouldn’t be proud to cause any kind of a mishap, let alone a train wreck. But in the case of Train Wreck, the new release from Ferret Music recording artists Boys Night Out, there’s something to crow about. The boys (and girl, Kara Dupuy has joined the group on synthesizer and vocals) have a newfound maturity to their sound that came about by design, yet somewhat by accident. Jeff Davis, one of the band’s guitar players and its primary songwriter, explains:

"I’ve been writing short stories in some kind of form since I was real young. When me and Connor (Lovat-Fraser, vocalist) were talking about this record, we wanted to do a concept record, or a record that followed a storyline, and I said, ‘I have tons of stuff written! Let’s see if the stories I’ve written can be changed around and can have an album written around them.’ So I picked out this one story and brought it to Connor and we made sure it was interesting. We wanted to make sure that if we broke it up into 12 different tracks, that each track told a valid part of the story and that it was never just like, ‘oh the character’s going to sleep – the character’s going to the store.’ So after we had it into 12 tracks we started writing the music."

Train Wreck opens with a dramatic spoken-word piece, "Introducing," wherein a psychiatrist recounts a patient’s spiral into homicidal insanity. The shrink doesn’t have any answers, and the wicked roller coaster ride continues through pieces summed up with one-word titles – "Medicating," "Purging" and "Relapsing" balanced with hopeful cuts "Recovering" and "Healing." Through it all, the band plays extremely slickly. Davis and second guitarist Shawn Butchart couldn’t be tighter. The vocals soar and Dupuy’s keyboard work rounds off a big sound that recalls the best of classy classic rockers, Toto.

The step-up musically has startled some of the group’s long-time fans and even surprised the band themselves. "It just kind of happened," says Davis. "We were definitely unhappy with where we were in music and with music in general and with music that we were surrounded by. We were bored. We just really wanted to apply ourselves and kind of push ourselves. We wanted to create and put as much musically into one different record without it being a messy hodge-podge of different styles. We wanted to make it coherent but with as much different music that we’d never done before."

Boys Night Out put in a lot of hard work to come up with Train Wreck, but that doesn’t mean that they didn’t cut loose and have fun at the same time. A case in point was when they shot the video for "Medicating," which is set in a psycho ward.

"It was super fun," Davis recalls. "We had a lot of our friends come out and we got to hang out with them all day and we got to play. The guy who plays the main character in the video is actually our good friend Dave; he sells our merchandise for us when we’re on tour. He’s a great dude and did a great job in the video." Boys Night Out hail from Canada, and the video was shot in Hamilton, Ontario.

Recently named Spin.com’s band of the day and about to head out on the Nintendo Fusion Tour, Boys Night Out are far from derailing.

Train Wreck is currently available. Boys Night Out will play with Fall Out Boy Oct. 27 at the Wiltern in Los Angeles and Oct. 31 at the Bren Events Center in Irvine as part of the Nintendo Fusion Tour. For more information, visit www.boysnightout.com.