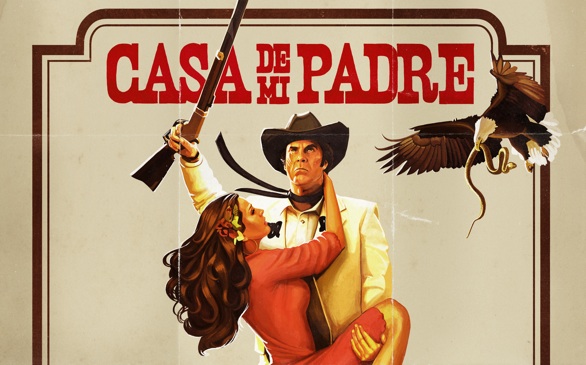 I sat down with cast and crew of one of the most eagerly awaited foreign-titled films in a long time, being marketed as “the greatest film with subtitles ever!” The excitement was buzzing at the Four Seasons Hotel in Beverly Hills, as those in attendance couldn’t wait to ask Casa De Mi Padre star Will Ferrell the million dollar question: Why? Why would Hollywood’s most successful and brilliant comic decide to risk everything and take a chance with a new filmmaking genre?

Ferrell answered quite simply, “Why not?,” and explained that the Casa De Mi Padre story concept was perhaps his greatest feat, not only as a comedian but also as an actor.

Ferrell’s co-stars couldn’t help but express the same sentiment. Genesis Rodriguez, who plays his love interest in the film, said that Ferrell’s breaking into the Latin novella genre came from a place of sincerity and wonderment that shines on screen, and Diego Luna couldn’t help but laugh about Ferrell making the opposite transition that he himself had to do, crossing over to American films from Spanish-speaking ones.

Director Matt Piedmont, a former writer for “SNL,” explained that the film pays homage to spaghetti Westerns and the bad but enjoyable movies of the 1960s. It pokes fun of the weaknesses inherent those films, yet it functions as a tribute to them at the same time.

“This project took time,” said writer Andrew Steele, a Funny or Die alum. Steele explained that despite much of the film being pre-planned in the script, the cast often ad-libbed scenes.

The movie came about when Ferrell approached Steele and asked him to write an original script in Spanish. Steele admitted he was a little nervous because his Spanish “was less than adequate,” but he accepted the challenge, watching hours of telenovelas and Spanish dramas. He eventually churned out an English version of the film, which was then translated and turned into Casa De Mi Padre.

“I think everyone on the project realized that it was so great because it was Will Ferrell speaking Spanish,” said Piedmont, who felt the basic idea sold itself.

Ferrell, who did not have any prior knowledge of the Mexican/Spanish culture, found the idea of exploring it very attractive, admitting he had to “eat, drink and speak Mexican” to prepare for his role.

When asked if he felt some people could view the film as offensive, Ferrell defended the movie.  “l had only good intentions with Casa De Mi Padre,” he said. “It was done all in fun, and I hope that people really enjoy the hilarious storyline and not only think about the racial subject matter.”

Piedmont made the film more authentic by using Spanish-speaking actors Diego Luna and Gael Garcia Bernal, who were both excited to be in the film, as it was an opportunity to portray the intermingling of Latin and American cultures.

While the movie is a comedy, it does have some serious and slightly sad moments, as the group wanted to keep the story contemporary by addressing the constant drug war that is currently going on in Mexico.

The serious moments allow Ferrell to show a different side of himself as an actor, proving that he is more than the comedic jokester he portrays in Step Brothers and Talladega Nights.

Casa De Mi Padre is a socially conscious and fun foreign-language film, and fans of Ferrell will enjoy watching as the actor reaches a new crossroads in his career.