Behind The Hunger Games 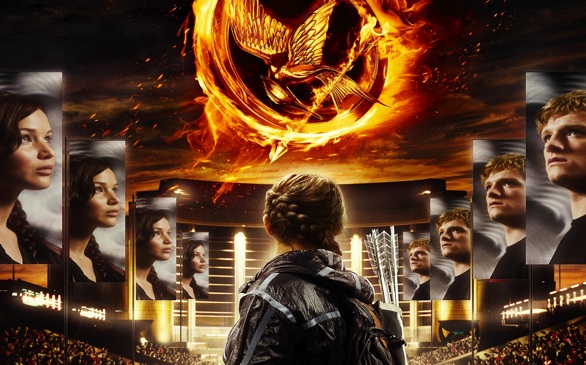 Author Suzanne Collins penned The Hunger Games in 2008, unaware that it would become a national bestseller and phenomenon. However, producer Nina Jacobson knew instantly that this was a book she wanted to get her hands on and turn into a movie.

“I couldn’t put it down and [I couldn’t] stop thinking about it,” effused Jacobson. “I couldn’t bare the thought of not being the producer of it; I felt very protective. I wanted the chance to be the champion for this book.”

The novel takes place in the future in what was formerly North America, where Panem has become the Capital surrounded by 12 outlying districts. As punishment for a former uprising, the Capital holds a reaping each year that requires a male and female “tribute” from each district to compete in the annual Hunger Games, a fight to the death in which only one tribute survives.

Katniss Everdeen, played by Jennifer Lawrence (Winter’s Bone), volunteers to take the place of her younger sister when she is chosen to represent their district, and prepares to compete along with fellow tribute Peeta (The Kids are All Right star Josh Hutcherson). Once taken to the Capital and thrown into the games, Katniss must use her wits, skills and adaptability to outsmart the other competitors and survive.

Sitting down with the cast, you immediately get a strong sense of their comradeship and pride. Liam Hemsworth, who plays Gale, joked, “Josh and I had an eye connection, and it was nice, great fun.”

Chuckling, he continued, “Seriously though, I had also met with Jennifer a couple times before we started shooting, and she is very easy to be around, and also very unpredictable which keeps you on your toes. She is an amazing actress,” he gushed.

This sense of friendship and playfulness among the cast members led to a lot of pranks, both on and off the set.

“We all got along really well and were like a big family,” said Alexander Ludwig, who plays the cunning Cato. “Amandla [Stenberg] (Rue) is such a prankster, hiding my clothes and making jokes all the time.”

However, it wasn’t all fun and games; because this book holds such a special place with so many fans, the pressure to live up to their expectations was intense.

Lawrence reflected, “It did give me pause; it was a scary and terrifying thing. I gave myself three days before I said yes, and combed through every doubt. I knew that I said yes without a doubt in my mind, and I haven’t looked back.”

Director Gary Ross also knew very quickly that he wanted to be involved in the project. “I threw my hat in the ring, and became hell-bent on making the movie,” he said –and his determination paid off. “I don’t think I’ve ever enjoyed my job more. I loved directing this movie and had a blast, because I personally connected with the material. When I finished the books, I had a really clear sense of how I wanted the movie to look.”

Ross had nothing but kind words to say about his star: “Jennifer is so confident and self-possessed, and very candid. It was a wonderful synergy of her into Katniss’s character.”

While Ross knew right away he wanted Lawrence as Katniss, the casting news caused some dissent among fans due to her blonde-hued hair. Lawrence took it all in stride, joking, “My hair can be dyed, and I thought it was funny. Maybe people thought I would be blonde wearing red lipstick and fighting in heels!”

One person who was decked out in full makeup and elaborate costumes every day onset was Elizabeth Banks, a professed huge fan of the book, who plays Effie Trinket.

“I wanted her clothes to be oppressive, because she’s a horrible person and very vain,” she explained. “I wanted the costume to work on me as an actress, [but] I got heat exhaustion on the third day of filming! I did have the best makeup though.”

“Stanley was great though! Those teeth, I was like whoa!,” he said, to which Banks agreed, “True, true.”

While many of the characters had unique costumes, others felt left out.

“I wore pants and a shirt,” said Kravitz. “When I saw them, I was like, ‘Damn.’ I did think it was a great choice for the character though.”

Wes Bentley, who plays head Game-maker Seneca Crane, rocked a serious beard for his role. “The beard alone took about three hours with all the design,” he said.

While the cast freely discusses their costumes now, fans were unable to get a sneak-peak no matter how hard they tried. “I wore a giant cloak to and from the set,” grinned Banks.

“Fans could not get on the set, it was like the military,” added Kravitz.

In addition to the costumes and the set, another buzzed about topic was if the violence of the book would be accurately portrayed. Lawrence commented, “I was concerned they were going to water down the violence, and if you do that, then you water down what sparks the revolution. We agreed that we wouldn’t make a watered-down version of Suzanne’s books.”

Hutcherson added, “The brutality is important, and there is such a disconnect with what is really happening.”

As for The Hunger Games’ mass appeal, the producer, the director and the actors all talked about how and why people connect so deeply with the story.

“It’s a very contemporary book, and speaks to the divisions between the 99 percent and the 1 percent, and to young people and their anxieties about a future that awaits them,” Jacobson commented.

Ross agreed, explaining, “This is also a very gender-blind story, and that’s why people are drawn to this equally.”

Echoing those sentiments, acting legend Donald Sutherland (President Snow) said, “I didn’t know anything about the books or the buzz, but I read the script and I felt I had read something that could quite possible be a game changer, [with the ability] to mobilize, catalyze and activate a generation of young people that has been dormant.”

Fans of The Hunger Games, both diehard and new, started the countdown to the release of the film months ago. Set to hit theaters on March 23, everyone is waiting with bated breath to see how the much-anticipated movie will be received.

However, the movie has already received the approval of the person Jacobson was most concerned about: “Getting Suzanne’s blessing was a huge relief, and made me so happy,” she said.

May the odds be ever in the favor of everyone involved in The Hunger Games, and here’s hoping they will all be able to breathe a sigh of relief on March 24.