More Disappointment for UCLA: No Invite to NIT 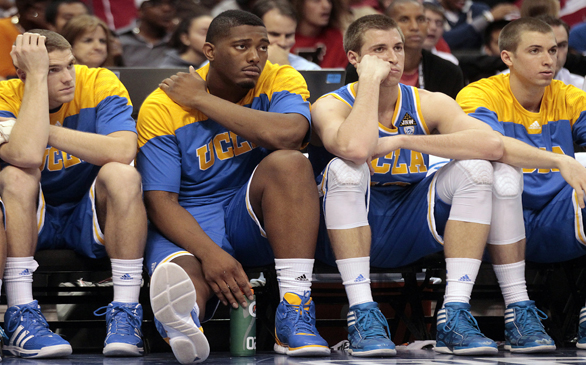 The UCLA Bruins did not receive a bid to this year's NIT.
(Credit: Luis Sinco/Los Angeles Times/MCT)

Somewhere on the UCLA campus, no one is quite sure where, the Bruins' 1985 NIT championship banner is lying around. Athletic department officials were unable to locate it when asked last month.

On Sunday, the NIT did not think the Bruins were worthy enough to lose another.

A Loyola official said that the Lions had not been expecting to receive an invitation.

The Bruins, on the other hand, seemed eager to get one. Coach Ben Howland said after the Arizona loss that they would accept an NIT invitation.

But NIT officials found other Pac-12 teams more appealing. Washington was shunned by the NCAA selection committee and the NIT is required to take conference champions that do not go to the NCAA tournament. But Arizona, Oregon and Stanford also received NIT bids.

Stanford finished sixth in the Pac 12. UCLA finished tied for fifth with Colorado, which won the conference tournament.

Howland was not made available for an interview after a request was made to a university sports information official.

UCLA has not always been eager to play in the NIT. University officials declined an invitation in 1984, citing academic concerns, although the Bruins' participation in the NCAA tournament had come during the same point in the school year.

UCLA won the 1985 NIT and the banner was hung in Pauley Pavilion - in a ceremony during an intrasquad scrimmage the following November. A decade later it was removed to make room for the 1995 national championship banner, unveiled in front of 12,000 fans.
The NIT banner is in storage ... somewhere.