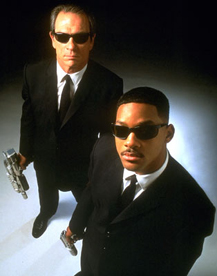 Untitled Document Protecting the Earth from the scum of the universe" was the line that introduced audiences to the wildly clever Men in Black in 1997. The film, directed by Barry Sonnenfeld (Get Shorty), centers around the missions of two black suit-clad special agents sworn to monitor the existence of extra-terrestrial life on earth. There’s Kay (Tommy Lee Jones, who proves he can do deadpan comedy extremely well with this film), the older, wiser and more sarcastic of the agents who has definitely been around the block more than once. He recruits young hothead cop Jay (Will Smith), and the two of them embark on a mission to stop a galactic war from occurring. The film is an energetic, witty mix of both sci-fi and comedy, and features a wide array of entertaining, scene-stealing supporting players: Rip Torn (as MiB Chief Zed), Linda Fiorentino (a saucy doctor-turned-MiB agent) and the ever-changing Vincent D’Onofrio (as an alien-inhabited farmer) among them.

ArcLight Cinemas in Hollywood will host a special screening of the film, which will be followed immediately by a special Q&A session with the film’s producers, husband and wife team Walter Parkes and Laurie MacDonald. The duo have over 20 joint producing credits, including The Mask of Zorro, Gladiator and the recently released Just Like Heaven, starring Reese Witherspoon.

ArcLight Cinemas is located at 6360 W. Sunset Blvd., in Los Angeles. For more information or to purchase tickets for this screening, visit www.arclightcinemas.com.