Lakers Not Too Bullish on Latest Gasol Offer 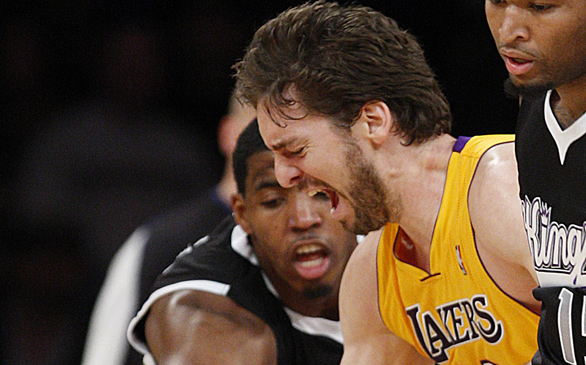 Pau Gasol left the team hotel to board the Los Angeles Lakers' bus before their game against Memphis, but not before fans offered applause and high-fives from the lobby to the sidewalk.

The four-time All-Star is still with the Lakers, continuing a surreal season in which he was destined for Houston in December before the NBA shut down the three-team trade that would have sent Chris Paul to the Lakers.

The trade deadline is noon Thursday, and the Chicago Bulls became the most recent team to have discussions with the Lakers about Gasol.

The Bulls offered power forward Carlos Boozer and guard C.J. Watson, according to the Chicago Tribune, though the Lakers were not interested in Boozer's bloated contract (three more years, $47 million). Derrick Rose, last season's MVP, was not part of the conversation.

The Lakers countered by saying they would consider receiving at least two first-round picks, center Joakim Noah and another player believed to be Watson, according to a person familiar with the situation.

Neither team liked what the other proposed and the talks ended.

Gasol is increasingly likely to stay with the Lakers until at least this summer. Making him somewhat hard to move is a 15 percent trade kicker in a contract that already pays $38.3 million over the next two seasons. If traded, Gasol would make $21.9 next season instead of $19 million.

The twists and turns of this week, if not this season, seemed to affect him in the Lakers' 116-111 double-overtime victory over the Grizzlies.

He was outscored by little-known power forward Marreese Speights, 25-14, and made only six of 14 shots.

"Not a great game on my part," Gasol said. "I didn't get too much rhythm at all. I'm glad I was able to knock down a couple shots in the fourth and one in overtime, I think, but that's about it."

He had an impressive eight assists but only five rebounds in 46 minutes.