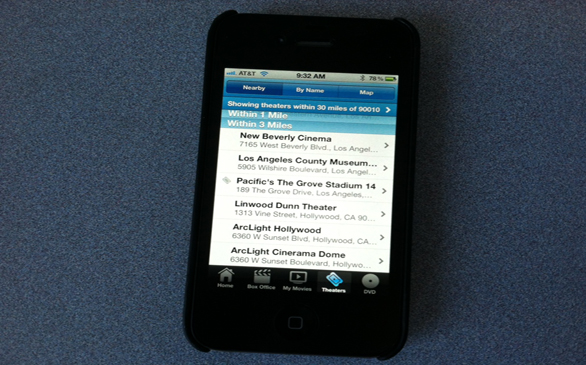 Cell phones, such as the iPhone above, are useful when planning a movie outing.
(Credit: Marvin Vasquez)

Looking to buck the line at the Regency Bruin in Los Angeles' Westwood neighborhood? It's fine if you bring your smartphone.

Within a few weeks, you'll be able to skip the box-office line and head straight to your seat by swiping your mobile device over a scanner. It can read the bar code of an electronic ticket purchased with an app that also gives show times, movie reviews and seating information.

Phones in the theater were once regarded as a nuisance, or worse - the embodiment of a mobile revolution that was dragging consumers away from the multiplex

These days, theaters welcome them. Along with better seats, 3-D projectors and upscale snacks, smartphones, iPads and other tablets are changing the century-old exhibition business, presenting opportunity for growth in an industry trying to stay relevant in the digital age.

"With box office having been down last year, it's important to use technology in every possible way to drive the industry forward, and we think mobile is the core of that," said Nicholas Lehman, an NBCUniversal executive who oversees several digital properties, including the online ticket service Fandango.

"It puts more people into seats, sells more tickets and creates a better experience for users."

Already there are dozens of phone applications that help consumers get to the movie theater, share their movie plans with friends and family, and receive special offers on concessions. A new app called MoviePal enables users to store trailers on their cellphones while sitting in the auditorium, and then sends them a reminder when the movie from the tagged trailer is being released.

Movie Night Out suggests things to do before and after the film and recommends restaurants and clubs. RunPee tells you the best time during a movie to take a bathroom break - to "help you enjoy your moviegoing experience and relieve your bladder at the same time," according to the company's website.

For theater chains, which have been spending millions upgrading theaters to install digital and 3-D projectors, mobile devices represent another way to reach younger, tech-savvy audiences that have not been going to the theater as much as their parents did. Although ticket sales have rebounded so far this year, domestic box-office revenue fell 3.4 percent to $10.2 billion in 2011, while theater admissions dropped 4.2 percent to 1.28 billion - the lowest level since 1995, according to Hollywood.com.