Jason Segel Gets Serious in Jeff, Who Lives at Home: Win Tickets for a Sneak Preview of Film. See Below for Details. 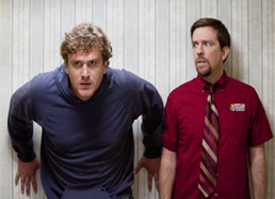 Jeff, Who Lives at Home opens with Jeff (Jason Segel) philosophizing that things happen for a reason. This view is solidified in his mind by M. Night Shamalan’s film Signs, in which Dakota Fanning’s refusal to drink water throughout the movie results in a home covered in glasses of water, which ends up being the key to destroying the alien invaders threatening Earth.

In this opening scene, Jeff is sitting in his basement, smoking from his bong like every other day in his life, when he gets a call for someone named Kevin, and takes this phone call as a sign.

“What if there is no wrong number?,” he ponders in the film. “Maybe it’s always the right number.”

His ruminations are temporarily interrupted by his mother (Susan Sarandon), who asks him to buy wood glue, so Jeff is forced to leave his basement to accomplish this seemingly easy task. However, his simple plan is derailed when he spots a man in a jersey with the name “Kevin” on it.

Following “Kevin,” Jeff embarks on an offbeat adventure to see where the name leads him.

The film is the latest brainchild of writing/directing duo the Duplass Brothers, who tell the tale of a man who is motivated by an intrinsic belief to follow whatever signs present themselves. Mark Duplass describes Jeff as the type of person who is constantly theorizing the nature of the universe.

“He is 30 years old and he is living in his mom’s basement, but in a way there’s an argument to be made that Jeff has more integrity than any of us,” says Mark. “He believes his life is meant for grand things, and he won’t settle. Jeff is waiting for glory. ”

Segel, who is known for his roles in huge projects such as the ever-popular TV show “How I Met Your Mother,” brings out the realism in Jeff, taking a slightly different approach to being comedic in this film.

“I was just born hilarious,” he jokes, “but beyond that this movie was a no brainer for me. It was so well written. It’s funny because by nature we’re a little bit funny, [but] the goal was to be honest on this one.”

This realism in the movie is used to demonstrate that in life, the funny often comes from how people react to situations they are thrown into by not-so-funny circumstances.

Such is the case when Jeff’s brother Pat (Ed Helms) becomes entangled in his younger sibling’s adventure by happenstance after a spat with his wife (Judy Greer). While he tries to get Jeff back on track to get the wood glue, they run across his wife on a lunch date with a co-worker. This revelation brings out Pat’s desperation to find out the truth by following her and confronting her.

Helms said he finds the scenes that deal with the complicated relationship between him and his on-screen wife to be therapeutic on a certain level. “I really love exorcising those icky feelings we all have about love,” he explains. “It’s tapping into real things, real emotions and experiences. It’s exciting and fun, but also has some sort of healing property.”

The realism in the film is aided by the Duplass brothers’ signature style of extreme zooms and close-ups. Jay Duplass, who mostly handles the camera, explains the documentary-like feel is a means to capture the cast’s authentic experiences.

“I just shoot what I want to see,” says Jay. “With great actors, they truly have to be having those moments when things are happening for real.”

Mark elaborates: “The core and the heart of this movie are all the subtle nuisances, the tragically comedic things that are running through their minds and their faces, so for us, the closer the better.”

The genuine performances in Jeff, Who Lives at Home celebrate the unexpected moments in life that bring people closer together. As Helms put it, “Every day is unforgettable, full of chaos and excitement.”

For a chance to win passes for 2 to a Sneak Preview of Jeff, Who Lives At Home at The Landmark in West L.A. on Thursday, March 15th at 7:30 p.m., click here.

For more information on Jeff, Who Lives At Home, click here.