Zumba on the Move in the Fitness World 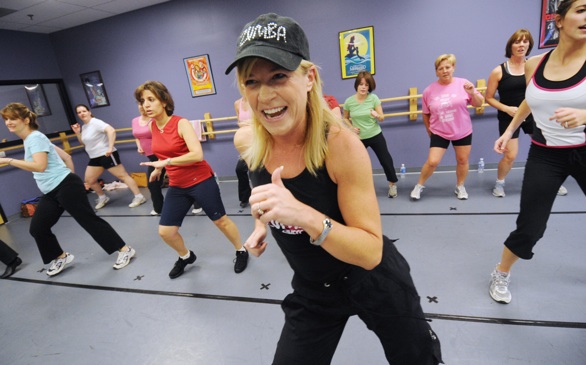 On a rooftop parking lot, with temperatures in the chilly low 50s, a crowd of all ages shimmied and shook, sweated and smiled as DJ Francis played an eclectic mix of dance music. But this wasn’t just another wild South Florida party. It was a special Zumba class for charity, led last month by the creator of the global craze, Alberto “Beto” Perez.

The charismatic Colombian in cargo pants — who has become a rock star in the fitness world — climbed onto the roof of a Chevy minivan that doubled as a stage. He demonstrated salsa steps, the merengue march and many other Latin-inspired dance moves — all while also cueing the drummer and the Bongo player.

For an hour, 75 of his adoring fans — and even the minivan — moved to the beat.

“Everybody loves it; everybody has fun,” Perez said while posing for pictures with his Zumba faithful, some who traveled from as far as Canada.

Two days later, Perez flew to New York to appear on the TV morning show “Live! with Kelly.” “You must be so rich by now,” host Kelly Ripa gushed to Perez, 41.

Perez’ Zumba classes, with the motto “Ditch the Workout, Join the Party,” were strictly a South Florida phenomenon 10 years ago. Today, Zumba Fitness has become the largest branded fitness program in the world, with about 12 million people taking Zumba classes weekly at 110,000 locations in at least 125 countries, according to company spokeswoman Allison Robins.

The private company won’t reveal information about the company’s finances or its net worth. But at a time when most of the world is struggling economically, Zumba Fitness’ empire appears to be flourishing. It is doing so on the strength of a growing army of certified instructors who spread the Zumba gospel to such distant outposts as Iceland, Papua New Guinea, Nepal and even Afghanistan — at the Kabul Community Center.

Zumba instructor Liz Ramirez, a U.S. Foreign Service officer with the U.S. Agency for International Development, said in an email that she teaches classes in the heavily guarded U.S. Embassy Compound that was attacked in September.

“In an environment like this, Zumba has been my lifeline,” Ramirez said. “It provides me with a creative outlet ... a needed balance to the challenges and demands of the workplace. The music is upbeat and the environment is supportive.”

And you don’t have to be in a war zone to need a stress reliever. Florida Keys attorney Dorothy Harden discovered Zumba classes two months ago and is hooked. “It feels like exercise because you are sweating, but it’s so much fun you forget you’re exercising,” she said. “You get your inner-dance on. And now I can fit into my clothes from college.”

Many fitness crazes have come and gone: barefoot running, hula hooping, Nordic tracks and strip aerobics, once a favorite of Carmen Electra. Staying power is tough in the ever-evolving fitness industry. John Figarelli, founder of the National Fitness Hall of Fame Museum and author of The History of Fitness: Fads, Gimmicks and Gadgets, said: “I think the owners of Zumba did a great job of getting it going from a business standpoint.”

Zumba Fitness does not charge gyms to carry its classes. Instead, it trains instructors and gives them the license and use of the trademark if they join the Zumba Instructor Network.

“We’re helping the instructors to become entrepreneurs and make a living out of it,” said company co-founder Alberto Aghion, a Florida International University alum who last year entered the school’s Entrepreneurship Hall of Fame.

It’s a sound strategy, said Figarelli, whose book covers 100 years of working out, from 1900 to 2000. “Most group exercise instructors will just go with the next popular class. But if Zumba is your business, instructors will stay with that.”

Ensuring instructors are successful has become the company’s main mission. “We have three people who all they do is call up gyms all day and try to find instructors employment,” said company co-founder Alberto Perlman.

The company has made Zumba instructors easy to find, with a worldwide listing that includes all of their network instructors’ classes regularly updated on the company’s website. Instructors also receive new music and choreography about every two months. The music department now creates music just for Zumba classes, with original songs that include Zumbalicious, Que Te Mueve and Caipirinha, which was a No. 1 song in Israel.

Zumba Fitness makes its money on its instructors academy, instructors courses, monthly fee for instructors in their network and on all its brand merchandise. The company has built its own line of hip, colorful clothing and footwear, workout DVDS, two video games, original music and a lifestyle magazine, Z-Life.

Zumba Fitness’ success also stems from its ability to reach all ages. A few years ago Joy Prouty, 70, a former Rockette at Radio City Music Hall in New York, suggested classes geared for her generation. The result: Zumba Gold.

For the first time, Zumba made the American College of Sports Medicine’s top 10 Worldwide Fitness Trends, coming in at No. 9 in the 2012 survey. It is ahead of yoga, boot camp, outdoor activities and spinning.

“Zumba is kind of interesting,” said Walter R. Thompson, professor of exercise science at Georgia State University and lead author of the trend survey. “It’s been on the survey list for the past three years and never got any traction. At the urging of my Zumba instructor friends I left it on the survey list and lo and behold it’s No. 9.”

It’s not clear yet if Zumba will have a long shelf life or be added to the long list of exercise fads, Thompson said. He will follow it to see if it stays on the world trend survey list for the next few years.

“I hope it stays around,” Thompson said. “It’s motivating a lot of people to exercise.”

That was the case for Colombian Tatiana Ward, who attended Perez’s Coral Gables rooftop class with her 67-year-old aunt. Ward said she lost 40 pounds with Zumba classes and now is an instructor who owns Cumbia Fitness in Keokuk, Iowa, pop. 6,000. “We only have three Hispanics in the whole town and Zumba is still huge there,” Ward said. “The Latin rhythms are new to them and hypnotic. They love it. Love the energy. People of all size and ages come and feel welcome.”