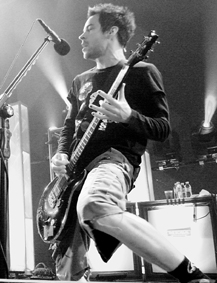 Untitled Document It seemed like the entire crowd was just as curious as I was to see what Chevelle’s live show had evolved into since Sam and Pete Loeffler parted ways with their former bassist, Joe (who just happens to be their younger brother), a few months ago. By the looks of the sweat-soaked bodies exiting the Avalon at the end of the night, I think it’s safe to say that most were pleasantly surprised to find the trio from Chicago’s set to be more energetic than ever.

First the audience was amped up by a vigorous set from Michigan’s Taproot. Vocalist Stephen Richards’s crowd interaction throughout the set was awesome. During "Smile," Richards threw his microphone into the crowd so that fans could scream the chorus of "no more, no more, no more!" before hurling the mic back to him. Richards then proceeded to take cups of beer to the sound and light techs in the booths on the floor and up on the balcony, walking through the crowd and then climbing over the railing back to the floor during "Sumtimes." Needless to say, security was not too happy with the impromptu workout they had chasing Richards around the venue.

Besides the aforementioned songs from Gift, the band performed a few tracks from their newest album, Blue Sky Research, including the gem "Birthday" and the CD’s first single, "Calling." The quartet granted a fan’s request of "Mirror’s Reflection," giddily stirred up a mosh pit, and closed with "Poem," one of its previous hits from Welcome.

As the crowd stared at the white lights reflecting off Chevelle’s amps in preparation for the band’s set to begin, anticipation grew steadily. Then, everything became bathed in red with the white light behind the red image on Sam’s bass drum providing the only illumination on stage. Next, there was a flash of lights, a burst of color and, with a hit of the cymbals, the show began with "Another Know It All" from the band’s newest release, This Type of Thinking Could Do Us In.

Pete began the song taking his traditional stance at the microphone stand with guitar resting on the knee that is habitually anchored to a stool next to his monitor, but eventually managed to move about the stage a lot more than I have seen him do in the past. He played to the crowd at the edge of the stage and criss-crossed the stage with tour bassist Dean Bernadini quite frequently.

Sam, on the drums, is a force that cannot be denied. His precise power and intensity, the way he commands attention even though he is behind the massive kit, never fails to impress.

The audience erupted at the first notes of "Vitamin R, " singing along note-for-note before their hearts really got racing in time with the shaking lights over Pete as he hissed out the lyrics to "Still Running."

The entire night was definitely heavy on the testosterone with a steady stream of moshers fueling a fire within the crowd on the floor, especially during "Forfeit" and "Get Some," the song Pete says is about "drinking too much." However, the ladies were not to be ignored. Pete asked, "Ladies, would you like a slow one?" before serenading the crowd with "Closure."

Chevelle performed other radio-hits from their breakthrough album, Wonder What’s Next, like "Send the Pain Below" and "The Red" before a rousing encore of "Panic Prone" and current single "The Clincher."