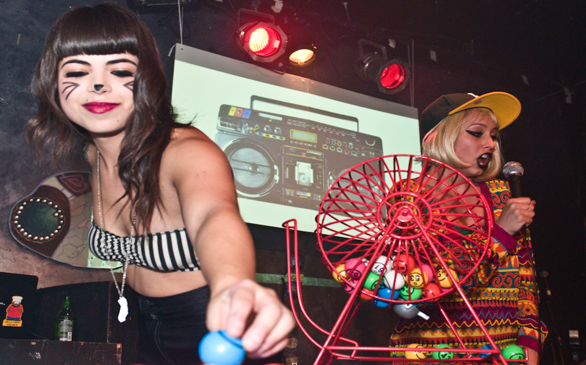 I found out about The Rebel Bingo Club a few months ago, after I noticed the disco ball addition to a good friend’s home –her prize for winning the classic-turned-underground party game. When I was invited to come shoot the hilarity, I jumped at the chance to possibly get a disco ball of my very own, or at the very least, to get a photo of someone else winning something as random and fantastic.

Rebel Bingo is a one-of-a-kind event, where people dance, draw on each other, dress like Alex DeLarge of A Clockwork Orange, and party in what can only be described as the love child of the Electric Daisy Carnival and a bingo club.

Walking around the two rooms and outdoor area of the venue, I was greeted by people painted in marker –and by then end my arms were covered in it myself. (In fact, for the next day and a half, my arm still said, “HI!” in bright purple marker.)

Started in the basement of a church in London by a couple of event promoters, the party has come to Los Angeles and has gained a well deserved following. Why wouldn’t it? In its essence, all Rebel Bingo entails is dressing up to play an innocent game your grandmother plays, but this version comes along with sexy hosts, drinking, dancing, and many fascinating characters. I think nights like these are what we all meant when we said we never wanted to grow up.

While I didn’t win a disco ball (this time, the grand prize winner took home an old school boom box), I did leave with some fantastic photos.

To find out more about Rebel Bingo and to buy tickets to the next event, taking place March 31 in Los Angeles, visit http://www.rebelbingo.com/.