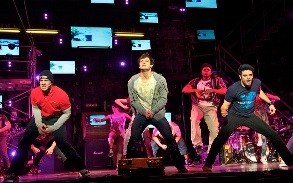 Just blocks away from where Occupy L.A. saw its origin, Green Day’s "American Idiot,” opened Wednesday night at the Ahmanson, echoing the sentiments that inspired a generation of people who grew up post-9/11 to “beg to dream and differ from the hollow lies.” Based off Green Day’s hit concept album, the rock musical arranges the songs into a story about three friends who face lives impacted by the War in Iraq, the media, and the disenchantment of the American dream.

Directed by Michael Meyer (“Spring Awakening”) the staging is of a certain cluttered state of mind, bombarded by what the media tries to sell and the explosive resistance of the individual. Told expressively through songs against this backdrop, the three friends, Johnny, Tunny and Will, each face the demons of the different forms of enslavement imposed on them by society.

Van Hughes stars as Johnny, the everyman who tries to find himself in a collapsing world, but finds love instead with a revolutionary referred to as Whatsername (Gabrielle McClinton). He’s also seduced by addiction incarnate St. Jimmy, played fellow original Broadway cast member Joshua Koback. Hughes definitely brings out heartfelt resonance in his performances with numbers such as “Boulevard of Broken Dreams,” while Koback exudes the allure of a drug in his numbers (including “Know Your Enemy”). Paralleling this journey is the tale of failed domestic slave Tunny (Scott J. Campbell), who along with his wife Heather (Leslie McDonald), struggled to keep their family together during the economic downturn. The couple shines in the number “Too Much, Too Soon.” Then there is Will’s (Jake Epstein) story of serving the country and fighting in the War in Iraq. One of the most interesting choreographed performances is “Extraordinary Girl,” in which Will and the woman who represents the ideal he fought for share an air-defying number.

Performances of showstoppers, like the cast anthems “21 Guns” and “Wake Me Up When September Ends,” will no doubt remind the audience of a personal experience from the past 10 years. The show has its riotous moments and reflective pauses, which provoke spectators to feel exactly what the characters feel. It is a relevant experience not to be missed.