Edward Sharpe and the Magnetic Zeros: March 14 @ The Observatory 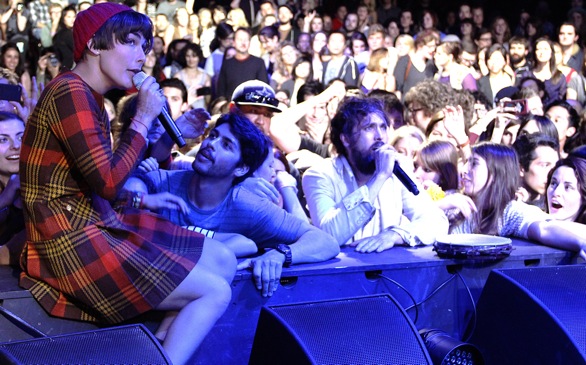 The audience patiently waited as Edward Sharpe and the Magnetic Zeros prepped back stage. The band was doing their pre-show ritual: huddling in a circle while they relaxed their minds by doing a set of hums, stretches and deep breathes, and then said the words, "Let’s do this!"

Finally, they stepped out onto the stage at the Observatory in Santa Ana for a sold out show.  The crowd stared at the band in absolute amazement, with a grin on everyone's face as they performed the first song, "Janglin’." Shoeless, with his white ripped capris, white blazer, thick beard and long brown hair, it seemed as though Jesus had just made an appearance.  The lead singer, Alex Ebert, maintained exquisite stage presence with his majestic voice, as he paraded into the crowd and even passed the microphone around to the fans. With 10 band members –two girls and eight boys –the sound was cutting-edge: folk tones full of vibrant energy.

Lead female vocalist, Jade Castrinos, kept the happiness alive as her delicate tone and dimples accompanied that of Sharpe and his Zeros. During the hit single, "Home," fans became a bit ecstatic and jumped onto the stage uninvited, which resulted in the whole crowd parading around the stage, making this show quite a memorable one.

Edward Sharpe and the Magnetic Zeros definitely are “the magical mystery kind.”