Shanley Caswell Has the Right Stuff 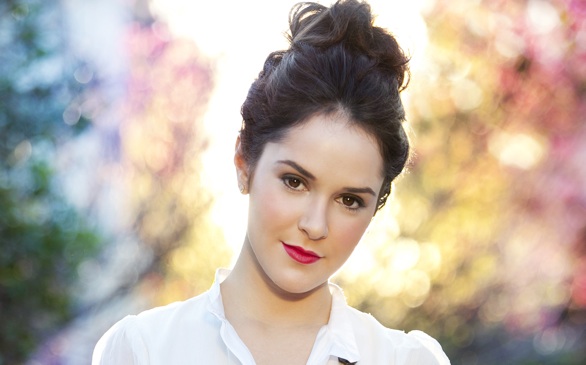 Introducing a young talent who has managed to balance a thriving acting career while pursuing a degree at UCLA, has an undeniable natural charm, and puts young Hollywood troubles into perspective.

In a trailer for her upcoming movie Detention, Shanley Caswell can be seen walking down the hall, when suddenly her legs go up as she slips on the floor. Next, someone is pointing to her protruding belly, and before you know it she’s in the bathroom puking. Then, she’s seen talking to the ‘cool guy’ at school, and her witty comments steal the scene.

If the trailer is any indication of the movie as a whole, it seems Caswell, who plays cynical high schooler Riley Jones, is poised to be the stand-out actor in a film whose cast also includes Dane Cook and Josh Hutcherson. All of the performances in Detention are hilarious, but Caswell truly shines. So who is this up-and-coming actress?

In real life, Caswell seems the opposite of the character she plays in Detention. She’s very friendly and outgoing, and gladly opens up about her past, present and future.

Caswell first got involved in acting when her parents suggested she do theater to as a way to overcome her childhood shyness.

“When I was 8, I auditioned for ‘The Sound of Music,’” she said. “ I enjoyed it, and the acting bug snowballed from there.”

Eventually, Caswell left her home in Florida and moved to Los Angeles to pursue acting professionally. Following in the footsteps of many notable child actors, she got her big break working on popular Nickelodeon shows including “Zoey 101” and “iCarly,” and also landed mature roles on “The Mentalist” and “CSI: NY.”

As a former child actor, Caswell understands first-hand why so many young actors find the transition to adult stardom very difficult.

“It’s hard for them because they grow up in the spotlight,” she explained. “Nothing about their life is normal. They are gong through stuff that every teenager goes through, but it’s magnified for everyone to see, which makes it worse.”

Fortunately, Caswell has transitioned into a young adult star without any major pitfalls, and is now involved in several noteworthy projects that are sure to propel her further into the spotlight.

First off is Detention, set to release April 13, which had a world premiere at last year’s SXSW Festival and won a Youth Jury prize at the Seattle International Film Festival.

Caswell had the chance to work with Josh Hutcherson on the film, who is poised to become a huge international film star when The Hunger Games premieres. The young actress had nothing but kind words to say about her co-star.

“He is this rare breed of child actor who has escaped the norm because he has this need for adventure, and he’s always willing to try something new,” she said. “I’m so excited for him.”

Caswell is also working on a movie called The Warren Files, which stars Patrick Wilson and Academy Award-nominee Vera Farmiga. Because the movie is still filming, Caswell couldn’t share too many details about the script.

“In the movie [Wilson and Farmiga’s] characters come into our house, and mysterious things happen. That’s all I can say!,” she exclaimed, laughing.

Add to her impressive resume the fact that she’s also a student at UCLA majoring in…anthropology. Why not major in acting?

“I wanted to open up my mind,” she explained. “With anthropology, you’re learning about the world, people, and different cultures.”

Talented and intelligent, Caswell had me laughing when she talked about her Simon Baker crush, and made me want to add the movies she’s been in to my must-watch list.

She has all of the right things necessary to make it in the industry. The future is looking pretty bright for this down-to-earth starlet.

For more on Caswell, find her on Twitter @Shanley_Caswell.